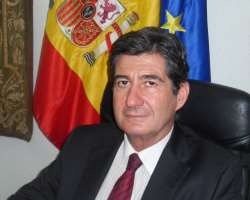 The Spain Ambassador to Nigeria, Ambassador Cabanas Ansorena Marcelino has commended World Health Organization (WHO) and Federal Neuro Psychiatric Hospital (FNPH) Maiduguri for impressively implementing the mental health strategic framework and development plan in Borno and Yobe states which plans are underway to extend the services to Adamawa state.

He also expressed satisfaction with the efforts of the World Health Organization (WHO) Mental Health Interventions and Federal Neuro Psychiatric Hospital (FNPH) facilities and services in the north east of Nigeria.

Ambassador Cabanas made the commendation Tuesday evening during his first facilities, IDPs, Children and services implementation assessment of the Mental Health Interventions Programmes being implemented by WHO in collaboration with the Federal Neuro Psychiatric Hospital Maiduguri.

The Spanish Ambassador said he had visited three IDPs PHC Clinics and inspected facilities and services being rendered by the WHO Mental Health trained workers, the children and other IDPs and was impressed with the efforts of the collaborating partners and had a clear picture of work done so far.

Mr. Cabanas further assured the children, IDPs and government that the Spanish government was ever ready and willing to continue to support the mental health Interventions of the WHO in partnership with the Federal Neuro Psychiatric Hospital Maiduguri to provide effective mental health services to the IDPs and people of the north east who have been traumatized by the insurgency.

Earlier, WHO Public Health Officer, Dr. Bala Hassan said under the programme, WHO has so far through its Mental Health Gap Action Programme (MHGAP) trained and engaged 10 Mental Health Specialists who each conducts 10 children visits each month to 3-5 health facilities in Borno state .

He said WHO developed Borno State Mental Health Strategic Framework (BMHSF) for 2018-2021 to be incorporated in the Borno State Strategic Health Development Plan-I, 2017-2021.

According to him, the BMHSF Implementation Task Force has been inaugurated and the development of the plan is currently ongoing as a result of this development where Borno state government has identified a Desk Officer to coordinate mental health services in the state.

The WHO Public Health Officer however said that the programme was faced with the challenges of funding to scale up mental health activities to other area of Borno, Adamawa and Yobe states, funding the cost of medication for indigent patients in the host communities and IDPs camps and provision of treatment cost for referred patients to the Federal Neuro Psychiatric Hospital Maiduguri.

Others include the provision of transportation cost for indigent patients in the host communities and IDPs camps referred to Federal Neuro Psychiatric Hospital Maiduguri and full scale implementation cost for the BMHSF.

In his remark, the Chief Medical Director(CMD), Federal Neuro Psychiatric Hospital Maiduguri, Dr Ibrahim Abdu Wakawa while appreciating the visit of the Spanish Ambassador to assess the facilities and services of the programme and implementation stage, said critical mandate of the hospital compatible with the global practices include preventive, therapeutic, rehabilitative and promotion of mental health, based on principles of equity, equality and non discrimination.

He said at the initial stages of the insurgency, most interventions of the hospital were towards physical health but subsequently formalized collaborations with various international organizations including WHO, IOM, UNFPA and others under the Mental Health Psychosocial Support (MHPSS) interventions.

Dr. Wakawa added that activities of the hospital in collaboration with WHO include training of 188 Health Workers consisting of nurses and community health extension workers (CHEWS) in 3 batches on Basic Mental Health interventions using Nigerian adapted version of mental health global action plan- intervention guide (MHGAP-IG) and have all been deployed to the communities where they are making invaluable contributions.

He noted that mental health presently available in 25 selected PHC Clinics selected across the state, 5 selected General Hospitals and 10 IDPs Clinics across the state which represents a significant paradigm shift in the status quo while severe cases above the competencies of the staff were referred to the Federal Neuro Psychiatric Hospital Maiduguri for further management.

As for the Referred Clients, the CMD said from October, 2017 to October, 2018, two thousand six hundred and thirty patients were referred consisting of 1,431 males and 1,199 females of which 1,894 were seen on outpatient basis, over 7, 484 on follow up visits while the remaining 736 clients consisting of 577 males and 159 females were admitted and managed for various disorders.

He explained that the collaboration covered the cost of consultations, relevant investigations, medications, bed and feeding fees for admitted. Clients and follow up visits which has remarkably improved access to mental health and quality of life of the people with identified challenges of 4 years children constituting 35% of the total referred clients.

They were only seen in outpatient as there were no facilities for inpatient admission and females with drugs and substance use problems were admitted into the general female wards due to lack of ward for them while soliciting for the extension of the mental health services to a significant proportion of the populace that are under incarcerations either in prison or other correctional facilities.

Dr. Wakawa assured that the hospital has adequate personnel and competence to deliver and implement the programme transparently while thanking the government and people of Spain for their interventions and appealed for the extension of the programme to other parts of the north east states.

The hospital is the only Mental Health hospital in the whole of the north east of Nigeria established in 1999 as a referral mental health and psychiatry center in the northeast region with the mandate to cater for the mental health needs of the populace and serve as hub for training, research and treatment of mental, Neuro psychiatric .and substance use disorders for a projected population of over 25 million people.