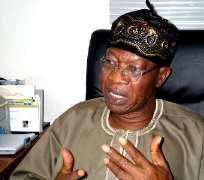 The Federal Government on Tuesday said there was no truth in the United States Department of Agriculture’s World Markets and Trade Report that claimed that Nigeria imported three million metric tonnes of rice in 2018, which is 400,000 metric tonnes more than the quantity of the product imported in 2017.

The Minister of Information and Culture, Lai Mohammed, while speaking with State House correspondents at the Presidential Villa on Tuesday said, “I want to say categorically that, that story is false. Predictably, the Atiku Media Organisation, this afternoon, latched onto the story. We are not surprised.

“I want to say categorically that, that story is fake and that Atiku Media Organisation also goofed.”

He said immediately after the story broke, he contacted the Central Bank of Nigeria and the Comptroller-General of Customs, while he also had meetings with the Rice Producers Association as well as rice millers.

The minister claimed that all of them responded that the story was not true.

“So, we challenge the US Department of Agriculture World Markets and Trade Report to provide evidence that Form M was opened to bring in 400,000 metric tonnes over and above that of last year and that Letters of Credit were also opened for them.

“Two, the records are very clear as to the importation of rice. You don’t have to take my words for it, but go to Thailand Rice Miller and the figures are there.

“These are not my figures; these are figures from the Thailand Rice Association.

“The claim that local rice production is on the decline is again absolutely false. Yesterday (Monday), when I spoke to the millers, all of them said, ‘please, just come to Kano, come to my factory you are going to see two kilometre length of trailers waiting to discharge paddy rice.’

“So, I want to say categorically again without fear of contradiction that the Anchor Borrowers Rice Programme is working. Nigeria has been able to reduce by 90 percent the $1.65bn it was paying on rice importation, the number of integrated rice processing mills increased from 13 to 25.

“Those are the majors and that between the smaller ones and the big ones, today the capacity is 4.9 metric tonnes of rice. That is why we are confident that in a year plus we are going to meet the six million metric tonnes of rice production which is our local consumption.

“The facts are there and I challenge anybody to the contrary.”

“You remember that we set up tripartite committee between the Republic of Benin and Nigeria comprising of the two Ministers of Finance and Agriculture and Comptroller-General of Customs of both countries.

“Two, we have been able to reach an agreement with the Benin Republic President to allow Nigerian Customs officials to be present at the Cotonou Port. And you know that only a week ago, Mr. President jointly commissioned the border building within Benin Republic. These are all attempts made to contain smuggling.

“We have grown rice farmers from five million to 12 million. Those facts are out there. We have created prosperity for rice farmers. We have about 32 or 34 states that produce rice, you can ask them.”

When asked if the Federal Government would engage the US government to present the facts since he has declared the story a fake news, Mohammed said, “That will be at another level. What we are doing here is to educate Nigerians and let them know that the story is false.

“Whatever steps government is going to take, I have a responsibility as the Minister of Information and Culture of this country to tell you what government has achieved; and if anybody tries to demarket the government, to put the facts straight.

“I am not surprised that the Atiku Media Organisation latched unto this story and unfortunately they goofed because what they ought to have done, when I was in their position as an opposition was to check with Central Bank, with Customs, rice farmers association and the millers. I have contacted all of them and what I am telling you is what I am telling you.”