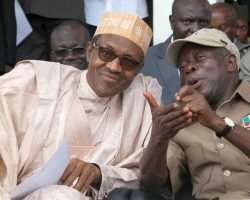 Ahead of the November 9 deadline for publication of particulars of governorship and state Houses of Assembly candidates by the Independent National Electoral Commission, INEC, there appears to be more headache for the ruling All Progressives Congress, APC over what sources see as ''looming mass defection.'' National Chairman of the party, Comrade Adams Oshiomhole, and Imo State Governor, Owelle Rochas Okorocha, weekend, were at daggers drawn over the latter's comments that five million members had left the APC since Oshiomhole mounted the saddle of leadership.

With a sizeable chunk of the APC governors 'losing out'' in the quest to get their candidates at various levels to fly the party's tickets, some of them are said to chewing various options to realise their ambitions. Disturbed by the scenario and a brewing threat to his re-election plans, President Muhammadu Buhari, last week, met with aggrieved APC aspirants at the Presidential Villa, Abuja to assuage their grievances.

Indeed, the APC is yet to resolve the issues it is having in Ogun, Ondo, Zamfara, Imo, Cross River, Delta, Rivers, Kaduna, and Adamawa states, and there are indications that aggrieved candidates may leave the party. Governors Ibikunle Amosun of Ogun and Okorocha of Imo, in the last one week have been criticising Oshiomhole over his handling of the outcome of the primaries and alleged substitution of governorship candidates endorsed by both governors. In the case of Imo, the matter is already in court with Okorocha insisting that his son-in-law, Uche Nwosu must remain as the APC governorship candidate in Imo.

As it is, some of APC governors and party leaders already have options to fly the flag of other parties. A South-West governor is said to have obtained tickets for some of his loyalists in rival parties. Piqued by developments in the party, Amosun had claimed of the existence of a cabal directing the affairs of the party at the national headquarters. Governor Rotimi Akeredolu of Ondo State at a stage attacked Oshiomhole for imposing candidates while at the peak of the controversies over the primaries in Zamfara, Governor Abdulaziz Yari threatened that he could not guarantee safety of National primary panel sent by Oshiomhole, if they come to Zamfara State.

Beginning with November 9, the aggrieved governors want to ensure that the names of their endorsed candidates are published by INEC as governorship and state House of Assembly candidates. If that fails, they want to ensure that the APC played to their dictates using the November 17, 2018 window (last day for withdrawal by presidential and National Assembly candidates (s)/replacement of withdrawn candidates(s) by political parties.

For governorship and state House of Assembly candidates the last day for replacement is December 1, 2018. Thus, as the date for final substitution inches closer, some aggrieved governors are said to be weighing various options. The options include: working from within the APC for opposition candidates; and fielding candidates in other parties to contest against those allegedly 'imposed' by Oshiomhole. If the aggrieved governorship, national and state assembly aspirants and their backers explore these options, it may hurt President Buhari at the poll, a reason he embarked on peace moves, last week.