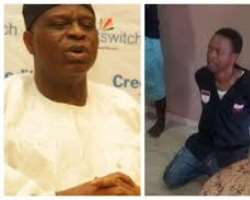 The Togolese who allegedly murdered Chief Opeyemi Bademosi on Wednesday, 31 October, 2018, at his 3A Onikoyi Lane residence, Parkview estate, Ikoyi, Lagos barely three days after he employed him as a cook, has been arrested.

He was arrested on Friday at Yaba area in Ondo town, Ondo state.

Lagos state Commissioner of Police Imohimi Edgal had earlier promised Lagosians that the suspect will be arrested to face the law.

He said the suspect can only run but not hide, and assured that at end of the investigation, the Command, in its usual manner, will give the public detail by detail account of how the suspect committed the crime.