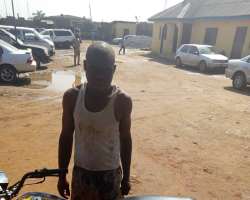 Just few days after returning the prison where he served jailed term, an ex-convict, Kingsley Chukwu has been arrested by men of Ogun State Police Command for stealing a motorcycle.

His arrest followed a distress call to the police that an Okada rider was attacked at Divine Wisdom Community in Iyesi area and his bike was snatched away.

Consequently, the DPO Onipanu Division, SP Sangobiyi Johnson led his anti-robbery team to the scene, combed the entire area with the assistance of the community members and eventually apprehended the suspect while his accomplice escaped. Further search led to the recovery of the snatched Honda motorcycle.

The Police Public Relations of the Ogun State Police Command, Abimbola Oyeyemi in a chat with The Nigerian Voice today confirmed the incident and the arrests of the suspect.

The PPRO said "On interrogation, the suspect confessed that he and his fleeing accomplice pretended as passengers when they stopped the okada man, and they hit him on the head with a sharp object which made him to be unconscious before they dispossessed him of the motorcycle.

Oyeyemi said the suspect had been convicted for similar offence and that he has just came out of prison where he served a jail yaerm.

The victim, Mr Umaru Hassan has been taken to the hospital where he is responding to treatment.

The Commissioner of Police, Ahmed Iliyasu ordered a serious manhunt for the escaped accomplice; he equally directed that the arrested suspect be transferred to FSARS for discreet investigation.