A Requiem For The Lifeless One 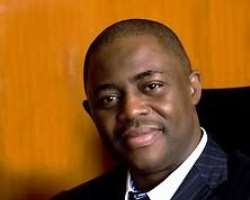 ”A voice is heard in Ramah, mourning and great weeping. Rachel weeping for her children and refusing to be comforted because they are no more”- Jeremiah 31: 15.

O lifeless one, you have lost all sense of decency and you are drunk with power.

As the children are murdered in cold blood and cut short in the streets of Abuja by your soldiers you watch silently from a distance: smug, smiling, detached, indifferent and secretly egging the killers on.

Simply put, the butchery and bloodfest excites you and stirs your passion. You love the brutality and finality of murder: it makes you feel like a powerful man and it makes your adrenalin flow.

As the mothers of the slain weep and as their fathers cry to God for justice your impish Vice smiles the smile of the wicked and boastfully proclaims how the two of you are preparing to dance "shaku shaku" for the 2019 election. Your sheer depravity and insensitivity is certified and confirmed.

You have proved me right: in 2015 I told the world that you were a heartless, dangerous and ravenous beast but few listened. I told them that in the spirit realm you were depicted as a hungry, lean, bitter and vengeful wolf but they could not perceive it and they did not believe.

Now they know better. Today the entire world have seen you for what you are: utterly godless and lacking any respect or compassion for the sanctity of human life. You are playing God as your people suffer and perish by your blood-soaked hands.

You butchered thousands of innocent IPOB members simply for peacefully demonstrating in the streets of the east.

You slaughtered thousands of defenceless Shiite Muslims in Zaria and Abuja simply for demanding for their rights and calling for the release of their leader.

You turned a blind eye and applauded with pleasure when thousands of Christian Middle Belters and southerners were subjected to genocide and ethnic cleansing by your terrorist Fulani herdsmen and you did not raise a finger to defend or protect them.

You said and did nothing when thousands of innocent men, women and children were butchered in their homes, fields, places of worship and farms by strangers from Niger Republic in Zamfara, Kebbi, Sokoto and other parts of the north west.

You strengthened and assisted the jihadists of Boko Haram to murder thousands in the north east by paying them huge ransoms and releasing hundreds of their footsoldiers and commanders from jail.

You brutalised and impoverished Nigerians and you turned our once prosperous nation into the poverty capital of the world. You lost 11 million jobs and you borrrowed more money than all the governments put together in the previous 16 years.

You failed to initiate, begin and complete even one capital project in three years, you devalued our money by 80% and you plunged our economy into the worse recession in our entire history.

You have brought nothing but fear, pain, famine, suffering, strife, calamity, division, death and terror to our land.

You persecuted your enemies and terrorised your critics and with every fiber of your being you sought to destroy them. Cruelty was your watchword, wickedness your banner whilst your ruthlessness was unprecedented and unrelenting.

You raided the National Assembly and locked out our legislators. You threatened and intimidated the Judiciary, broke their spirit and bent them to your will. You stormed the homes of Judges and whisked them away in the dead of the night.

You assualted a sitting governor and ordered them to stop him from travelling. You took over INEC and rigged every election. You declared your opponents thieves and looters and banned them from travelling abroad.

You corrupted the anti-corruption agency and you used the security and intelligence agencies to torment your enemies and do your dirty work.

You silenced and intimidated the press, you relished the abuse of power and you protected your friends even after they stole and killed.

You showed disdain and displayed contempt for your own people and you consistently insulted and denigrated them, calling them ignorant, corrupt and lazy fraudsters, whenever you travelled abroad and addressed foreign leaders and the foreign press.

You lied about your educational qualifications yet you insisted on calling yourself Mr. Integrity.

You locked up and tortured your opponents and in the case of Sambo Dasuki, El Zak Zaky and countless others you disregarded court orders and threw away the key.

You raided the home of Nnamdi Kanu and attempted to kill him. You slaughtered his friends, staff, family members and dog and made him flee into exile.

You left Leah Sharibu in the hands of her brutal jihadist abductors and you refused to bring her home with the others simply because she is a Christian.

You sat back silently and watched both Christian and Muslim clerics being slaughtered by evil men whilst their Churches and Mosques were bombed and burnt to the ground. O Lifeless one, what manner of man are you?

So much innocent blood has been shed by you and under your watch yet you refuse to show any remorse or bring the perpetrators to justice.

You heart is hardened and unrepentant and consequently the Lord has already determined your end.

As long as Jesus sits on the throne and the heavens rule in the affairs of men you will never escape the consequences of your wickedness.

The innocent blood that you have shed and that has been shed under your watch cries out from the earth and speaks against you before the God of Heaven.

You will be roundly defeated in the next election by one who God has raised, empowered and preserved specifically for this time.

You will be humiliated before the world and brought to your knees and after that you will pay the price and be brought to justice for your heinous crimes.

You shall reap what you have sown, you shall fall before the world and your bitter end shall be a testimony to the power of God and proof that He alone rules in the affairs of men.

O lifeless one, read these words carefully for this is your requiem.