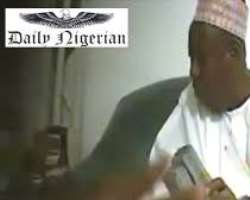 The publisher of the Daily Nigerian, an online newspaper, Jafar Jafar, has insisted that the video on the alleged bribery against Gov. Abdullahi Ganduje is genuine and undoctored.

The publisher said this on Thursday when he appeared before the Kano State House of Assembly ad hoc committee to investigate the allegation.

A video clip purported to be that of the governor had gone viral in the social media depicting him as collecting bribe in US dollars from a contractor.

Jafar said before the video was published, the online media had carried out series of verification to ensure the genuineness of the clips.

Jafar admitted that he contacted the Kano State Government officials to verify the video clips.

He added that the government had earlier before the videos were released, issued a statement denying the genuineness of the clips.

Jafar further said, “I received the video clips from a whistle blower who has been complaining to me, claiming that Ganduje is of the habit of collecting percentage from contractors.

“I could not believe him until when he presented the video clips to me, which he said was recorded with a camera fixed on his cloth.”

He added that he received the videos in September 2018, but had earlier watched it since 2016.

According to him, some of the clips are showing the face of the Governor while some are not, adding that it was deliberately done by the Daily Nigerian to cover the voices of those present when the incident occurred.

Jafar said among the documents he presented to the committee on Thursday were the video clips with all the voices of those involved.

The publisher who had refused to disclose his source, added that he was going to consult his lawyers if the law permitted him to divulge the source of his information.

“But I want to clear the mind of some people who have been saying I was paid, if it can take me to swear with the Holy Qur’an that the video was not for political reasons,” Jafar said.

The Chairman of the Committee, Alhaji Baffa Danagundi, said the committee was set up to investigate and find out the truth of the allegation.