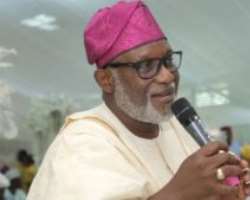 He described the primaries as “political charade”, saying they not only exposed the “sheer incompetence” of APC's national leadership, but revealed “a shocking proclivity towards banditry and impunity”.

According to him, those who feel aggrieved reserve the right to demand justice, including calling for Oshiomhole's removal.

The governor, however, restated his commitment to work “assiduously” for President Muhammadu Buhari's re-election, who he said is loved by the people of Ondo who see his re-election as a “patriotic duty”.

Akeredolu, in a statement by his Senior Special Adviser on Special Duties and Strategy Dr Doyin Odebowale, was reacting to an allegation that three governors, led by Akeredolu, was bent on sabotaging the party.

During a pro-Oshiomhole protest at the APC Secretariat in Abuja, Akeredolu's name was mentioned as the “leader” of “conservatives” bent on working against the re-election bid of President Buhari through the removal of Oshiomole as APC chairman.

But, Akeredolu, who described organizers of the protest as “opportunists”, denied the allegation that he led governors of Ogun, Kaduna Adamawa and Ekiti States against Oshiomole's leadership.

Akeredolu said he found the report laughable and distracting, adding that as a fiercely independent personality, he was not about to change his attitude to please any person or a group of persons.

“There is no truth in the whole contrivance. The governor has been pre-occupied with matters of governance in Ondo State for which he was elected,” the statement said.

Akeredolu recalled his “noble interventions” as Nigerian Bar Association (NBA) President at critical moments in the cause of the progressives, including in restoring Oshiomole's stolen mandate.

The statement said: “The Governor had expressed preference for someone else during the contest for the office of the Chairman of the Party.

“He did not hide his opposition to Mr Oshiomole's aspiration for the simple reason that the leadership of a party, especially the one just emerging from a merger, should distance itself from egregious and inherently destructive narcissism.

“Recent events seem to justify this position as prescient. Only sycophants will fail to see the obvious. Mr President would not have expressed worries over the crises in the Party if everything had gone on smoothly.

“The handlers of the mob strive in vain to set the President against certain government functionaries considered antagonistic to their pernicious scheme for dominance.

“Their devious plot to outsmart those perceived as opposing their expansionist tendency compelled them to take desperate measures. Anyone endowed with an attitude of sobriety should have seen the need for calm.

“Rather than retrace their steps and display genuine contrition, their desperation pushes them to embrace measures capable of not only hurting the Party, but, regrettably, the President, whom they pretend to love so much.”

Akeredolu said it was ludicrous that anyone would consider him a conservative.

“Those who collected varying and humongous amounts as fees from aspirants during the last grandiose charade called primaries and submitted names dictated to them by a cabal, notorious for capturing political power for unbridled pillage, should be bold to explain their real motives to the people. They should be honest enough to deal with the issues.

“Events, which took place across the country during the political charade, have exposed not only sheer incompetence on the part of the national leadership of the party, but painfully, it has revealed a shocking proclivity towards banditry and impunity.

“It is becoming clear, increasingly, that party leadership at that level is seriously challenged in terms of capacity for serious engagements.

“Arakunrin Akeredolu, SAN, does not need to move from 'North' to 'South' to collect signatures from victims of electoral heist. He was in Ondo State throughout last week.

“He was at Obafemi Awolowo University, Ife, to deliver a lecture on restructuring a few days ago. He is at presently in Canada on a working visit.

“Only the mob and their hirers can explain the imagined movement from North to South. However, those who feel aggrieved reserve the right to demand that justice be done. If this includes the removal of Mr Oshiomole, so be it.

“May we seize this opportunity to reiterate the fact that the people of Ondo State are favourably disposed to the second term bid of Mr President.

“Our people are unique; they are unwavering in their support for justice. They alone determine what is in their best interest at all times. The President is loved by the people of Ondo State.

“All of us shall work, assiduously, for the President's victory at the polls next year. We do not need any band of mendicants ready for hire to remind us of this sacred patriotic duty,” the statement added.