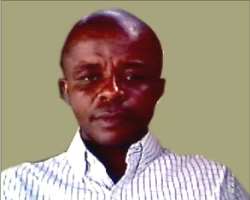 ‘’Ifa kin puro, ifa kin se eke’’ (literarily translated as Ifa oracle neither lie, nor gossip) is a Yoruba mythology that has become a word made flesh which dwells among us(Nigerians) as it fittingly typifies the current political situation in the country.

Although there is little left to build on as ours is a political sphere dotted with cynicism. But, with the recent intra, inter, trans and cross political developments/prophesies on our wavelength, it has become an ‘unhappy truth’ that history, like ‘Ifa Oracle’ which neither lie nor gossip is positioning to repeat its self as the masses appears to have again crawled out of waiting passively to crystallize network of mutuality that may replicate 2015 general election experience not minding whether they possess the needed capacity (political and financial) to probe the theory/obligation of power.

Very instructive, without being unmindful of the fact that voting during the election may not be enough as what happens between elections is the measure of how a government treats its people, one must in the interim, frankly acknowledge the energy dissipated in awareness creation on the need for the Permanent Voters Card (PVC) possession as well as the imperativeness of voting in the forthcoming general elections.

But then, this effort notwithstanding, the missing link is that the scope of this struggle to enthrone good governance in the country by Nigerians has remained both lopsided and narrow because they allowed the politicians by choice or by accident to destroy their capacity to develop world perspective about leadership and made their sense of tribal/ethnic loyalty stronger than common sense of nationhood.

This situation certainly may not be strange to the watching world for reasons that come in double folds-with the first and most radical being that apart from the fact that the 1999 constitution (as amended) provided for ‘rights to a standard of living adequate for the health and the wellbeing of himself and his family, including food, clothing, housing and medical care and necessary social services, and the rights to security, successive administrations deliberately failed to bring in the human rights approach to governance that will guarantee education/infusion of human rights principle of participation, accountability, transparency and non-discrimination, as well as foster the attainment of equity and justice.

Closely related to the above is the reality that the managers of our nation’s economy continue to go against the provisions of the constitutions as an attempt to disengage governance from public sector control of the economy has only played into waiting hands of the profiteers of goods and services to the detriment of the Nigerian people. While the nation continues to lie prostrate and diminish socially and economically with grinding poverty and starvation driving more and more men into the ranks of the beggars, whose desperate struggle for bread renders insensible to all feelings of decency and self-respect, the privileged political few continue to flourish in obscene and splendour as they pillage and ravage the resources of our country at will.

And, if nothing is done to alleviate this appealing situation, it will hopelessly confirm why the nation is stumbling. Exiting this ‘circle of chaos’ among other efforts must require a change of mindset and development of Spartan discipline by Nigerians to ‘fight’ against some norms/myths and their proponents who prey on the resources of the entire people.

One of such myths, as we approach the 2019 general election, is the erroneous claim by various administrations on corruption fight. As we know, corruption, a major mantra of all governments since 1999 has contrary to speculation become even more entrenched as scandal upon scandal has completely laid bare the anti-corruption stance of our political elites.

Markedly, like every other socioeconomic challenge, corruption will be difficult to fight or meaningful changes implemented on the nation’s political shore when the individuals/institutions who are the cause of the problems in the first place are still around. And attempting to engineer prosperity without confronting the root cause of the problems and politics that keep them going in the writer’s views is unlikely to bear fruits.

To truly confront this challenge, Nigerians must harness the opportunity presented by the forthcoming 2019 general election to reject those that manipulate public opinion, those that like to make accusations against their enemies/opponents repeating them loudly and often with the hope that people will begin to believe them.

Aside fighting corruption, this time is also good for Nigerians to put their faith in the technocrats who have integrity, intellect, and energy and drive to move the nation forward while erasing the myth/belief which portrays the election as a do-or-die arrangement. All must remember that democracy survives only where/when the people have the culture of accommodation and tolerance which makes a minority accept majority’s right to have its way until next election, and wait patiently and peacefully for its turn to become the government by persuading more voters to support its views.

Again, like the ECOWAS Network of Electoral Commission (ECONEC)recently decried what it described as high cost of conducting elections in developing countries, the benefits of the 2019 general election may be low and Nigerian’s hope of building the nation of their dreams far if they fail at this critical moment to recognize that the rule has changed the world over. That for an honest government to emerge, candidates must not need large sums to get elected, or it must trigger off the circle of corruption as having spent a lot of money to get elected, winners must recover their costs and possibly accumulate funds for the next election as the system is self-perpetuating.

Above all, in this 21st Century, human life has witnessed the greatest human attack more than in any other century and Nigeria has had her own share of the human attacks and refusal to take sides on great moral issues. A state of affairs Archbishop Fulton J. Sheen American Bishop of the Catholic Church described as a decision itself and a silent acquiescence to evil.

To therefore record change, Nigerians must question the present administration why the power freely given to them in 2015 has not been used to end the sufferings of Nigerians and provide employment for the millions of unemployed youths? And like ‘Ifa oracle”, what Nigerians expect is the answer and not lies and gossips.