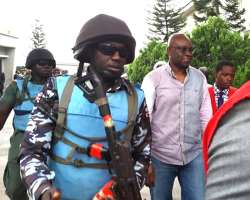 The trial of a former governor of Ekiti State, Ayodele Fayose, facing an 11-count charge will begin today at the Federal High Court, Lagos.

Fayose will be facing a joint trial alongside Mr. Abiodun Agbele (now facing another charge) and Spotless Limited.

Fayose and Agbele allegedly took possession of the sum of N1, 219, 000, 000.00 to fund his 2014 gubernatorial campaign, which, according to the EFCC, Fayose ought to have known formed part of the proceeds of an unlawful act.

On June 17, 2014 in Lagos, Fayose was alleged to have, without going through the financial institution, received a cash payment of $5, 000, 000 from Senator Musiliu Obanikoro, the then Minister of State for Defence, which sum exceeded the amount authorised by law. Fayose, right, and an EFCC operative at the Nnamdi Azikiwe Airport in Abuja on Sunday enroute to Lagos

It was alleged that both Fayose and Spotless Limited between June 17, 2014 and August 4, 2014 in Lagos, took control of an aggregate sum of N317, 000, 000.00 by depositing same into the Zenith Bank Plc’s Account No: 1010170969 belonging to Spotless Investment Limited, a company controlled by him and members of his family.