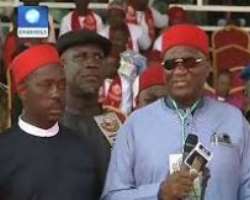 In what appears to be a direct response to the feeble opposition of the Ebonyi State governor, Chief Dave Umahi, the Ohanaeze Ndigbo has asked Ndigbo to accept the choice of Mr. Peter Obi, a former governor of Anambra State, as running mate to Alhaji Atiku Abubakar, the presidential candidate of the Peoples Democratic Party, PDP, in order not to upset the political arrangements ahead of the 2019 general elections.

He spoke against the backdrop of the claim by Umahi, who is also the Chairman of the South-East Governors' Forum, that the zone's leaders were not consulted before Atiku, a former Vice President, nominated Obi as his running mate.

“As the National President of Ohanaeze Ndigbo, I am a father to all the political parties. My appeal is that Igbo leaders in the PDP should let bygone be bygone and accept whoever has been nominated. We should not upset the applecart. We should accept Peter Obi so that we can move ahead, politically. This is both my prayer and appeal,” Nwodo said.