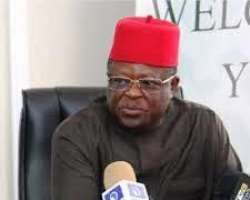 Impeccable sources close to the Atiku/Peter campaign network said that Umahi, Chairman of the South-East Governors Forum and who is well known for his closeness to President Muhammadu Buhari, is alleging that Atiku did not consult them before settling for Obi as his choice. This is despite the fact that the choice of Obi has elicited widespread acceptance across the country.

“As part of the rejection, Gov. Umahi with a few others working behind the scene, has called the meetings of Igbos in Enugu today to formally reject Mr. Peter Obi as the Vice Presidential candidate,” one of the sources said.

For Chris Uba, another PDP chieftain, his opposition to Obi is believed to be informed by economic considerations, as Obi had running battles with him during his days as Governor for refusing to continue illegal payments made to him as the then political godfather of the state.

Meanwhile, the Yorubas have expressed readiness to take the Vice Presidential slot with or without consultations. A Lagos-based lawyer, Barr. Wale Agosu, captured the thinking of the Yorubas when he wrote on Facebook:

“I have never seen a more terrible, wicked and brainless people. Imagine, after all the pressure that HE. Abubakar Atiku should choose his running mate from the West, he still went for an Igbo man. Did you notice that since the emergence of Mr. Peter Obi, Nigerians are united in commending the choice because of its quality? I think from what my friends from Anambra State tells me, Obi is an epitome of good governance and Nigerians rejoice because they see in him a man whose expertise will be of great value to the re-building of our over bastardised country.

“Instead of embracing their own and working with him, some Igbo people are saying they were not consulted. What a people! Is this how they are going to achieve Igbo Presidency?

“The stand of these people means in clear terms that they are rejecting the offer.

“We Yorubas are therefore begging HE Abubakar Atiku to come and pick one of us. We do not even need consultations; just pick one of us because there is no time to waste.

“Let me ask again: Is this how this people will achieve Igbo presidency?”

On his part, another Yoruba lawyer, Barr. Sona Sat, perhaps exasperated by the bickering among the Igbo political elite, wrote in his own Facebook post: “Igbos do not know when to close ranks. I heard Ike Ekweremadu and others have vowed that Atiku must drop Mr. Peter Obi as his running mate. When Osinbajo was nominated, did we hear such in-fighting among the Yorubas? Please come and reason with me!”