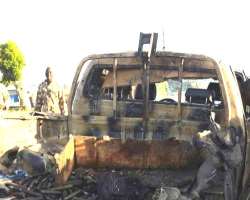 A statement issued. Saturday by Brigadier General Texas Chukwu, the Director Army Public Relations said several members of the Boko Haram Terrorists were neutralized while others fled with gun shot wounds during the encounter.

One vehicle was recovered from the terrorists while three gun trucks were also destroyed by the troops.

The public is once again reminded to report any suspicious movements or activities in their areas to the law enforcement agents for prompt action.