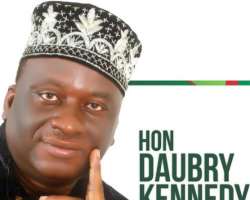 The member representing Burutu II in Delta State House of Assembly, Hon. Kennedy Daubry, has emerged as the All Progressives Congress APC candidate for Burutu Federal Constituency for the 2019 general elections.

The Returning Officer, A.S Mene, State Organizing Secretary of APC, said Daubry was returned unopposed and adjudged the exercise as peaceful and credible.

Daubry, a two term lawmaker at the Delta State House of Assembly, expressed gratitude to the APC delegates, leaders and supporters in Burutu and assured to reciprocate their supports if elected at General elections.

He further dedicated his victory at the primary to the people and electorates in Burutu local government, and promised to collaborate with the APC led administration to bring development and industries to area for create jobs for the graduates and youths.