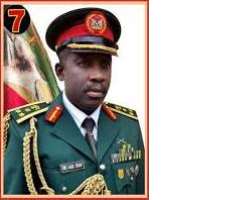 Troops of 7 Division deployed in operation LAFIYA DOLE Sector One, have been assured of provision of adequate welfare packages at all times while discharging their constitutional roles.

Brigadier General Texas Chukwu, the Director, Army Public Relations in a statement Thursday said, the GOC further stated that the operational visit to Chibok, Askira, Michika, and Madagali was intended to assess the combat readiness of the troops and review tactics and strategies that will see to the total defeat of Boko Haram Terrorists. He also assured the troops of the Chief of Army Staff's effort at addressing most of their welfare issues, adding that he has already approved the distribution of uniforms to formations and units.

He re-emphasised that, the ongoing rotation of troops of Operation LAFOYA DOLE will continue in line with the Nigerian Army policy and assured them of prompt rotation when due.

He pointed out that, the war against Boko Haram Terrorists must be concluded soon and charged the troops to be prepared to make sacrifices remain prayerful, motivated and step up their game so as to consolidate on the gains so far made in the fight against terrorists.

General Bulama also emphasised the importance of prayers in all endeavours and requested the Deputy Director Islamic Affairs and Deputy Director Chaplain Services (Protestant), to offer prayers for the troops and the success of the operation in all locations visited.

The Acting GOC was received and conducted round the 28 Task Force Brigade locations by the Commander. He was accompanied by the Commander 47 Engineer Brigade, Combat Service Commanders as well as Principal Staff Officers.