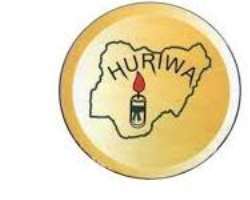 A prominent non-governmental and pro-democracy group – HUMAN RIGHTS WRITERS ASSOCIATION OF NIGERIA (HURIWA) has threatened to report to the Nigerian press council a suspected fake news carried by Nigeria Daily.com on a certain All Progressives Congress (APC) governor purportedly receiving bribe of over $5 million from a contractor.

The pro-media integrity organization (HURIWA) through its National Coordinator Comrade Emmanuel Onwubiko and the National Media Affairs Director Miss Zainab Yusuf however stated that it has sent a letter to the affected medium to remove the offensive news item or provide irrefutable evidence including verified forensic investigative findings to conclusively affirm the authenticity of that suspected fake news or be prepared to face inquisition from the Press Council, the official ombudsmen of the Print media industry. HURIWA said it gave the online medium 78 hours to effect corrective measures and stop misinfoming its readers or the organisation will not hesitate to follow due process to obtain remedy on behalf of consumers of media contents in Nigeria. The group faulted the quality control employed by the affected news medium which informed the uploading of such a sensational fake news targeting a perceived political opponent of the sponsor of the entire scripts.

HURIWA asserted that the publication on the alleged bribery affecting an unnamed APC governor was a pure blackmail given that the publisher of the website has suspected links to an erstwhile presidential aspirant in Peoples Democratic Party (PDP) and former governor of Kano state Rabiu Musa Kwankwaso who is nursing ambitions of supplanting his son-in-law as Kano state governor. HURIWA expressed shock that this sort of unprintable news item could be uploaded for public view when the elements critical to objective, balanced and professional and Ethically correct procedures are flouted by the online medium which is supposed to be professionally owned and governed. HURIWA is also planning to write the professional body of online publishers in Nigeria to ask them to investigate the affected news medium.

“We have conducted detailed investigation and found out that the author of the said story on the unnamed North West governor caught in camera collecting bribe in foreign denominated currency running to over $5 million was a key media strategist of the politician and former governor of Kano state and was indeed his senor Special Assistant on media as the then governor of Kano state. Our team of forensic media analysts have thoroughly gone through that sensational story and found several elements that shows that the story is not only fake but a product of pure political blackmail which must not be allowed to be swept under the carpets.”

“As campaigners for media integrity, we have asked the writer to pull out the fake story because of the clear and unambiguous fact that it was indeed planted for primitive political motive and meant to misguide and misinform voters with the aim of tarnishing the image of a politician.”

Daily Nigerian reported that a Nigerian governor from one of the North West states has been caught on spy camera receiving kickbacks in hard currency for various projects executed by his administration.

The governor, who is gunning for his second term on the platform of ruling All Progressives Congress, APC, may likely be dropped due to the damning evidence of corruption against him.

In the three-episode clips seen by DAILY NIGERIAN reporter, the governor was shown on different dates receiving the bribe amounting to about 5 million dollars in total.

In one of the clips, this reporter watched how the governor, who appeared without a cap, took note of the names of contractors who paid the kickback and later tucked the bundles of dollar notes into his kaftan side pockets and trousers’ pockets.

In another video, appearing in babbarriga and a cap, this reporter watched how the governor collected nearly 3 million dollars, being 25 percent kickbacks for selling market stalls.

DAILY NIGERIAN graphics expert, who was also invited to a secret meeting to ascertain whether the videos were genuine, confirmed that they were not doctored.

HURIWA however disputes the veracity of that video and alleged that it is an attempt to adopt the 'Russian type' of circulation of fake news to influence the outcomes of next year’s election even as the target of the blackmail is the ruling All Progressives Congress (APC).

“We will not stop until we get to the root of this story by adopting professional means to ascertain why the online medium deployed their forum to scandalize a politician who may not be in the good books of the publisher’s former employer and former governor of Kano state.”

Earlier in a press briefing, HURIWA affirmed thus: “Gentlemen of the media, we are here to call your attention to the need for media practitioners to be professionally disciplined and not give into any temptations to be deployed for political blackmail which will derail the essence of the media as the conscience of the nation.”

“Section 22 of the 1999 constitution provides that “the press, radio television and other agencies of the mass media shall at all times be free to uphold the fundamental objectives contained in this chapter and uphold the responsibility and accountability of the government to the people.”

“The media is therefore the bridge between the people and the political leaders.”

Understandably, we are rights now preparing for the biggest and most important electoral contest in the political annals of Nigeria. So much are at stake.

The contenders are already sharpening their political arsenals to battle and defeat their opponents in a bid to win the hearts and minds of Nigerians.

However, we have just noticed a trend which has to do with the misuse and abuse of the professional ethics of media practice by an online medium reportedly owned and operated by an erstwhile chief press secretary to the former governor of Kano state Alhaji Kwankwaso known as Daily Nigeria.

We have noticed that there is currently an attempt to tarnish the corporate and public image of a politician with the aim of scuttling his second term ambitions.

First, we are one of the most formidable campaigners of transparency, accountability and we therefore support the law based crusade against corruption.

However, we totally condemned the systematic pattern of employing subtle blackmail using the media of mass communication as the tool of political battles.

The story about a certain North West governor of the APC purportedly caught receiving bribe is at best a very poor work of blackmail.

Going through the wishy-washy story will tell the audience that this online medium did a very poor job that fails to meet the ethical standards of best global practices. The revelation that a video exists without naming the person and again stating that the video would be used to seek the directive of the president to compel the alleged bribe taker to forego his second term election shows that this medium has allowed their good venture to be deployed to wage political battle.

The fears about the political ends to which the media can be put relate to the way the media can be used by political parties to control people. While totalitarian fascist and communist states of the 1930s inspired these fears, political uses of the media also occur in democratic societies.

It is often argued that there should be controls placed over the media so they are not misused. Fear that the media may be used for political purposes is one reason why many countries insist that the government should not own and/or control the media; this fear also lies behind many of the debates about who has the right to media ownership. Note, however that media practitioners often see themselves as political watchdogs, and in this respect are referred to as the ‘fourth estate’. The term ‘estate’ derives from the time of the French Revolution, when the judiciary, the parliament, and the Church were referred to as the first, second, and third estates respectively. The media, as the fourth estate, are a body who can comment on, criticize, and investigate, through free speech, what these other institutions do, which is why freedom of the press is so important. It was, for instance, the media that publicized the crimes against humanity perpetrated by the South African apartheid government. “From the book MEDIA & SOCIETY fourth edition, By MICHAEL O’SHAUGHNESSY & JANE STADLER.

May we strongly urge the media to be thoroughly professional and not let themselves be railroaded into carrying out political vendetta or blackmail.

Why use a story and then allow room for negotiations? If you have a story worth telling and you have no political objective for cooking up such soft tissues of lies, why not go full blast?

This unorthodox way of practicing journalism is the reason some core conservatives who wants the status quo to remain are working had to scuttle media freedoms.

Our investigations on this specific story shows that it is a well-choreographed, politically tainted propaganda aimed at demonizing a prominent politician and to rubbish some of the achievements made. There is every reason to believe that it is a politically motivated hatchet job which should be dismissed as such.

May we call on all political contenders for political offices to play the game by the rules and desist from the deployment of the online, social or mainstream media to circulate fabrications and inventors aimed at scoring political goals. The media must be vigilant and work to sustain constitutional democracy.