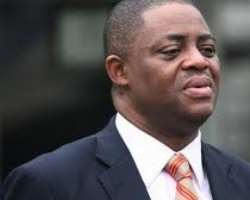 A Christian group, Christians in Power Network, CIPN, has advised the Peoples Democratic Party, PDP, and its flagbearer at the forthcoming 2019 general elections, Alhaji Atiku Abubakar, to choose a former minister of aviation, Chief Femi Fani-Kayode, as their vice presidential candidate.

In a statement signed by Apostle Chikezie Onyekere and Pastor Solomon Ayuba, the organisation’s Coordinator and Secretary respectively, the group said “we predicate our advice on the fact that Chief Femi Fani-Kayode, unlike many Christians, is the one man who has stood firmly for the faith and has suffered immense persecution in the hands of the establishment because of this. He is one man many Christians believe has been ordained by God to rescue us from the hands of our relentless traducers and murderers”.

The statement continues: “The population and spread of Christians in Nigeria cut across regions and ethnicity. The greatest fear of Christians today is that of insecurity where priests, pastors and their members are wantonly killed, our churches continuously desecrated and destroyed, and our sources of livelihood wasted, we as Christians will not vote for any party that parades a Christian who cannot effectively represent our cause at the highest levels.

“Apart from the votes that Fani-Kayode would get from the southwest as one from there, he will also get massive votes across the nation and everywhere Christians are found because we have come to see him as our voice, not just us but also evry oppressed Nigerian irrespective of religion, ethnicity or party affiliation.

“This will be the masterstroke for both Atiku Abubakar and the PDP”.

“Fani-Kayode is loved for having been consistent in playing the roles of voice for the voiceless and defender of the defenceless without any immunity covering him even while those with one refused to speak up for the people.

“No doubt, an Atiku/Fani-Kayode presidency will be an ideal team that would tackle our economic crises and insecurity satisfactorily. We shall sensitise and mobilize our people massively to vote for the PDP at the presidential election should we be sure that we have a strong voice for us there. Fani-Kayode is widely loved across the major religions of the country. He has spoken up for the Shiite Muslims who have suffered untold hardship in the hands of the current government. He has spoken up for Dasuki, a Fulani Muslim, who is being unjustly held in detention even after multiple valid court orders had granted him bail. He has also spoken up for Sheikh El Zakzaky who is suffering a similar fate to that of Dasuki etc. So no one can accuse him of religious bigotry.

“We pray Alhaji Atiku Abubabkar and PDP to strongly consider this advice if they want to make any inroad among our people with humongous population in the country.”