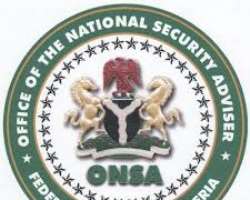 Lagos: Monday, October 8, 2018: Media Rights Agenda (MRA) today named the Office of the National Security Adviser (ONSA) to the President as this week’s inductee into its “Freedom of Information (FOI) Hall of Shame,” accusing the institution of acting under a mistaken belief that the principles of transparency and accountability do not apply to it.

MRA’s Legal Officer, Ms Chioma Nwaodike, announced the induction of the ONSA into the Hall of Shame in a statement in Lagos, saying “since the enactment of the FOI Act seven years ago, National Security Advisers to the President have consistently acted under a mistaken belief that because they are supposed to advise the President on national security issues, principles of transparency and accountability do not apply to them and their office, and that they are above Laws which have been enacted to give effect to these principles. They could not be more wrong!”

According to her, “Given our recent history, when our national security was so dangerously put in jeopardy by acts of mind-boggling corruption coordinated and executed by the Office of the National Security Adviser as well as the unconscionable looting by the heads of virtually all the branches of our military of the resources meant for the institutions over which they presided, we can no longer afford to pretend that people who hold such positions are acting in our best interests always. We should therefore no longer afford them the absolute lack of transparency and accountability in their affairs which made their nefarious activities possible.”

Saying that “national security” should not provide a cover for acts of corruption and mismanagement of public resources, Ms Nwaodike stressed: “As clearly articulated in the Global Principles on National Security and the Right to Information, otherwise known as the Tshwane Principles, which were adopted in South Africa in 2013, it is clear that ‘legitimate national security interests are, in practice, best protected when the public is well informed about the state’s activities, including those undertaken to protect national security.”

Noting that the FOI Act applies to the ONSA by virtue of Sections 2(7) and 31 of the Act, Ms Nwaodike said: “However, since the passage of the Act seven years ago, the Office of the National Security Adviser has failed to comply with most of the provisions of the Act, which impose duties and obligations on it as a public institution. For instance, Section 2 of the Act obliges it to proactively publish certain categories of information, which it has consistently failed to do over the years while also neglecting to fulfill its other legal obligations.”

She observed that despite this requirement of the FOI Act that certain classes of information should be made available to the public proactively, through various means, including print, electronic, and online sources, “the Office of the National Security Adviser is practically invisible to the public, including citizens.”

Ms Nwaodike also noted that despite the provisions of Section 29(1) of the FOI Act, which requires every public institution, on or before February 1 of each year, to submit to the Attorney General of the Federation a report on its implementation of the Act over the preceding fiscal year, the ONSA has only submitted a report for 2013 over a period of seven years, when it ought to have submitted seven such reports.

She pointed out that the ONSA has also failed to designate and publish the title and address of an appropriate officer to whom applications for information under the Act should be made, as provided by Section 2(3) (f) of the Act, adding that “the only logical explanation for this dereliction is that the Office either does not expect anyone to seek information from it or if anyone does, it has no intention of responding to such request for information.”

Besides, Ms Nwaodike said, there is no indication that the ONSA has provided the required training for its officials on the public’s right of access to information which will enable relevant officials to effectively implement the law, as provided by Section 13 of the FOI Act as well as to ensure that the staff of the institution are all aware that a legal regime of access to information is now in force in Nigeria and that they are bound by the Law.

MRA launched the “FOI Hall of Shame” on July 3, 2017 to draw attention to public officials and institutions that are undermining the effectiveness of the FOI Act through their actions, decisions or utterances.