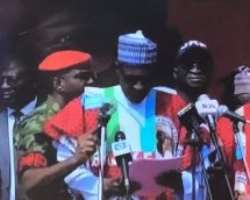 The   national convention of the All Progressives Congress has affirmed President Muhammadu Buhari as the party's presidential candidate for the 2019 general elections.

The All Progressives Congress has announced that President Muhammadu Buhari polled a total of 14, 842,072 across the 35 states and the Federal Capital Territory during the party's direct Presidential Primary to emerge as it's 2019 candidate.

The All Progressives Congress has announced that President Muhammadu Buhari polled a total of 14, 842,072 across the 35 states and the Federal Capital Territory during the party's direct Presidential Primary to emerge as it's 2019 candidate.

The figure was affirmed at the convention in Abuja  Saturday night.

Buhari was the sole presidential candidate of the party.

Governor-Elect of Ekiti State, Dr. Kayode Fayemi who served as returning officer announced this early Sunday morning during the National Convention of the party held at Eagle Square, Abuja.

After announcing the figure, he asked delegates to affirm President Buhari as the party's candidate for the 2019 Presidential elections via voice vote.

He said, “Do you affirm Muhammadu Buhari as our candidate for 2019 presidential election? The delegates shouted “Yes”.

Earlier, National Chairman of the APC Adams Oshiomhole, has said with  President Buhari as the party's candidate, the APC was now ready for the 2019 election.

He said this in his welcome address at the convention of the APC, in Abuja, on Saturday.

Oshiomhole said the President has given a good account of himself as a leader who leads by example.

In a veiled reference to the Peoples Democratic Party, Oshiomhole said unlike the other party which printed only one presidential form and came up with 2 million signatures from unverified individuals”, the APC chose a more democratic process using the direct primary method which gave all registered party members a true sense of participation.

Oshiomhole said, “The other party is choosing its candidate in Port-Harcourt, we will look at the records of the opponent, we will look at his pedigree, we will challenge them on their track records. We are ready for the 2019 elections.”

He also dismissed claims by members of the opposition PDP that the anti-graft war being fought by the President Muhammadu Buhari-led administration was selective.

Oshiomhole said the complaints by opposition figures that the current administration was being heavy-handed should be ignored because it was nothing compared to what APC members suffered during the last administration.

He said as a sitting governor then, he was denied the use of a public airport.

He also said, ” Mr. President, sometimes I feel you are too mild. I was under threat of impeachment, I had to remove the roof of my House of Assembly in order to survive.

“One of your predecessors used seven people to remove a sitting governor. I am not in anyway suggesting that you do the same.”