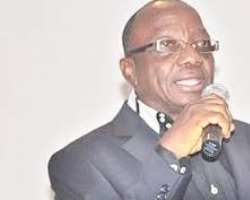 An All Progressives Congress (APC), leader in Delta North Senatorial District, Hon. Paul Adingwupu has disassociated himself from the news making round of an alleged process initiated that produced Prof. Pat Utomi as APC gubernatorial consensus candidate for Delta North.

Adingwupu in a statement, said that he was not involved and never participated in any process that produced any candidate for the 2019 Delta North guber election.

While lamenting an attempt to cause disaffection within the party, he said his attention was drawn to the purported rumour; and was shocked to be associated with falsehood.

He said it was the handiwork of mischief makers within the State, who are now jittery with the coming together of APC which has become a formidable party in Delta State and ready to confront the bad government of the ruling party in the State come 2019 general elections.

“I wish to unequivocally state that the party in Delta North has not adopted any consensus candidate, neither did I initiate or moderate any process as falsely reported; and if there is going to be any, all the gladiators jostling for the APC Delta North gubernatorial ticket will come together in mutual agreement”, he said.

He expressed happiness with the strides recorded so far by the All Progressive Congress in Delta State and called on the people to elect credible and dynamic leaders in the coming election so as to change the rot in the State and to better the lives of all Deltans.