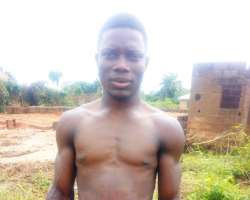 Born on 25th of November, 1996, Oyetunde Oyebisi was a great source of joy to his parents and the entire family. He was christened according to the norms and his full name and his date of birth were written on his stomach. That was how his parents recorded his birth and they thought his birth had been sufficiently recorded. Without basic education, the 22-year-old Oyebisi is now learning how to become a bricklayer and he is quite oblivious of what the future holds for him. His case is just one out of millions of such instances.

A Child Protection Specialist with the United Nations Children’s Fund (UNICEF) in Nigeria, Sharon Oladiji said children whose births were not registered have no official record as citizens of the country. “Their access to basic services is under threat; their official ‘invisibility’ increases their vulnerability to abuse and exploitation. In legal terms, they do not exist. Violations of their rights are going unnoticed.”

The Assistant Director of National Population Commission in charge of Vital Registration Directorate, Hapsatu Husaini Isiyaku said birth registration is a process of recording the birth of child by National Population Commission. She said “It is the permanent and official record of a child’s existence by the government and is fundamental to the realization of children’s rights and practical needs. Birth Registration is free and universal and conducted within the context of a functional civil registration system in Nigeria”

According to the Multiple Indicator Cluster Survey, as at last year, only 47 in every 100 children below age five were registered duly. Births in Nigeria keep growing to 7m a year whereas less than half are registered. Apparently, it would be difficult for government at all levels to plan properly for the children in all the nooks and crannies of the country, particularly in terms of healthcare delivery and quality education.

According to Isiyaku, major reason for these children notbeing registered is either due to ignorance of the parents and care givers or the very rural communities have no knowledge of birth registration. She noted that about 62 percent of births in Nigeria occurred at home while only 35 percent of births in the country are delivered in health facility. Quoting the 2013 Demographic Health Survey, Isiyaku said “birth registration of under-5 children in Nigeria is approximately 30%, while the remaining 70% remain unregistered and in legal terms do not exist.”

To address the challenge, the NPC deployed a mechanism known as RapidSMS, an online database tracking registered births nationwide. This database indicated that in August 2018 alone, the births of 144,047 children below one year were registered. 223,227 children aged one to five were registered while 92,387 children aged over five were also registered. This mechanism is very useful as it allows states to analyse how well the birth registration runs within their territories.

However, there is still huge gap in birth registration in the country. Nigeria is estimated to have an annual birth cohort of around 7 million. Out of these 7 million children born every year in Nigeria, only eight in every 100 of them are registered in the country as indicated by the NPC RapidSMS database. With this indication, more than half of all children born each year in Nigeria were unaccounted for, officially and with this situation, there are 32 million children unregistered in Nigeria and these kids face bleak future. Going by the new government policy mandating the National Population Commission to register every birth since 1992, millions of these children like Oyebisi should be registered and captured in government plan to secure a great future for them.

Onikanni said the officials of NPC in the state usually go to hospitals and birth centres regularly to register new born babies and that the NPC officials in the state also visit hospitals on the days of immunization to capture infants for birth registration. He noted that the NPC in Osun State has not been found wanting in ensuring registration of new born babies in the state. He assured that the officials of the commission would further intensify efforts to register the children that have not been registered.

Speaking on the benefits of proper registration of births with NPC, Isiyaku said gains of birth registration include securing children’s right to a nationality, allow them to get a passport, open a bank account, obtain credit, vote and find employment. “Birth Registration helps ensure access to basic services, including immunization, health care and school enrolment at the right age. Birth registration is also essential in protection efforts and links cross sectoral and on inter-thematically with Health, Education, right issues, Nutrition, Water Sanitation and hygiene ( including: preventing child labour by enforcing minimum-employment-age laws; ensuring that children in conflict with the law are not treated (legally and practically) as adults; shielding them from underage military service or conscription; countering child marriage; and reducing trafficking, as well as assisting children who are repatriated and reunited with family members.”

“As part of the Child Protection Section’s focus on strengthening community level approach, birth registration efforts in the first half of the year focused on community, wards and LGA intervention during the NPC EAD process in 15 states. The approach and process enabled birth registration of at least 680,657 under-5 children in 15 LGAs, 150 wards and 1041 communities, whose births would never have been registered. Currently, 3,411,419 (females/1,652,248 and males/1,759,171) children in different age bands have been registered in the first half of 2018”, she added.

She commended the contributions of stakeholders in the efforts to achieve proper birth registration in the country. “To further straighten the collection of data on civil registration and vital statistics, the Commission collaborates with the United Nations Children's Education Funds, Ministries of Health, Education, Nigerian Immigration Services, Ministry of Women Affairs, National Identity Management Commission and the result is encouraging. Such collaborations will be sustained by the Commission for better, reliable and accurate data on births, deaths, marriages, divorces in Nigeria.”

She noted that the collaborations have yielded positive results in which the National Population Commission is now providing a wider coverage of births registration in Nigeria and that the Synergy brought about the use of health officials to record births at the place of its occurrence particularly in hospitals, maternities, and health centres among others. She also added that through collaboration with the UNICEF, Nigerians are being sensitized in the media on daily bases on the importance of registration of births and death.