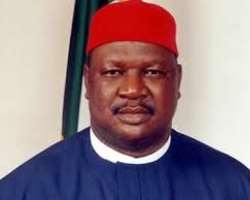 Mr Pius Anyim, former Secretary to the Government of the Federation under PDP's administration of ex-President Goodluck Jonathan, on Friday held a closed door meeting with President Muhammadu Buhari.

The 57-year-old ex-Senate President met with Buhari at the Presidential Villa in Abuja on Friday.

Anyim, after the meeting with President Buhari at the presidential villa, declined comments on the outcome.

He was also former Senator on the People's Democratic Party (PDP) platform in 1999 for the Ebonyi South constituency.

The Senator, who is serving his third term at the National Assembly, declined also to comment on the outcome of the meeting.

The News Agency of Nigeria (NAN) gathered that the senator updated the president on security and political developments in Zamfara.

Prior to the meeting between the president and Sani-Yarima, Sen. Kabiru Marafa, representing Zamfara Central, had held similar meeting with President Buhari.

Marafa, had told State House correspondents that he updated President Buhari on the failed APC governorship primary in Zamfara, and alleged that the state governor, Abdul aziz Yari, had lost the support of people of the state.

He described as “illegal and irresponsible'' the action of the governor after the announcement of the cancellation of the primary by the Prof. Abubakar Faki-led APC Zamfara Governorship Primaries Committee.

The National Working Committee (NWC) of the All Progressives Congress (APC) had also dissolved the party executives at all levels in Zamfara, and fixed Oct. 6 and 7 for the conduct of fresh governorship, senatorial and house of representatives primaries in the state.

Mr Yekini Nabena, the APC acting National Publicity in a statement on Friday in Abuja, said by the decision, all supposed party factions in Zamfara stands dissolved.

He added that the APC NWC-inaugurated committee for Zamfara are to conduct the Governorship and Legislative primaries in the State.

He stressed that the Zamfara State Governor, Alhaji Abdul'aziz Yari and the dissolved state executives should not interfere in the primary elections.