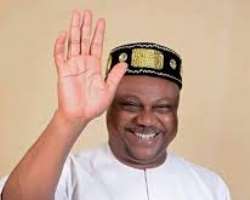 Ahead of the 2019 general election, the Delta State chapter of the All Progressives Congress (APC), governorship primaries has produced Chief Great Ovedje Ogboru, as the party’s flag-bearer.

Ogboru, who is fondly address as “the peoples general”, by his teeming supporters, floored three other aspirants to emerged candidate of the party to slug it with the Peoples Democratic Party (PDP), candidate and incumbent governor of the state, Ifeanyi Okowa, in the election.

The APC candidate pulled a total vote of 3, 292 to clinch the first position while Victor Ochei, scored 160 to become second, Prof. Pat Utomi, received a vote cast of 26 as third and Chief Cairo Ojougboh, got 12 to be the fourth position respectively.

Announcing the results, the Returning Officer, Major General Lawrence Onoja, said “as the returning Officer of APC gubernatorial primary election held on Sunday 30th September 2018 at Asaba, Delta State, I hereby declare Chief Fantastic Great Ovedje Ogboru, having scored the highest number of votes cast in the election returned as the gubernatorial candidate of APC in Delta State in the 2019 general election”.

Ogboru, in his acceptance remarks called on other aspirants who contested with him to sheath their swords, unite and work as a party to face their common opponent, “with the quest to translate our state into a new Delta”.