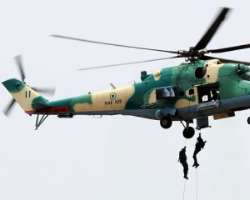 The Nigeria Air Force (NAF) says one of the pilots who successfully ejected from one of the F-7Ni aircraft that had earlier crashed in the FCT, has passed on.

Air Commodore Ibikunle Daramola, NAF Director of Public Relations and Information, said this in a statement on Friday in Abuja.

” It is with a heavy heart that I regretfully announce that one of the pilots who successfully ejected from one of the F-7Ni aircraft that crashed earlier today has passed on.

” May his soul rest in peace. Additional details on the incident will be communicated,”Daramola said.

Two NAF aircraft had crashed in the FCT when they were performing rehearsal for Nigeria’s 58th Independence Anniversary in the territory on Friday morning.