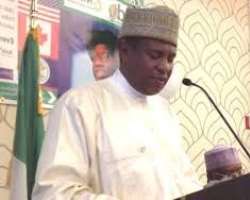 Against wide speculations across the state that Governor Kashim Shettima has endorsed one of the 24 governorship aspirants as APC 2019 Governorship Candidate, 14 out of the 24 aspirants rose from a critical emergency meeting Thursday evening endorsing the earlier decision of the State Chapter of the party and subsequent endorsement of the National Working Committee NWC to conduct indirect primaries for the election of the governorship, senatorial and house of representatives candidates of the party.

Addressing journalists in a press conference immediately after the crucial closed door meeting at the Government House Council Chamber Maiduguri Thursday, the Spokesman of the Governorship Aspirants who is also an aspirant, Ambassador Baba Ahned Jidda, the Nigerian Ambassador to China Republic said, "the Borno state chapter of the APC has collectively decided to elect its candidates into various elective positions through the indirect primaries".

" This is in accordance with the provisions of the party's constitution and the final decision of the National Working Committee," Jidda said.

He added that it will be recalled that few weeks ago, the APC in the state convened a meeting involving critical party executives at the state, local government and ward levels as well as the party leaders in the state to decide the best possible option to determine the party's candidates in different elective offices, taking into consideration the physical and political peculiarities of the state.

According to him, consequently, the Borno state APC in a letter dated 3rd September , 2018 formally conveyed the party's resolution to the national headquarters of the party for their Information and endorsement.

He noted that the NWC , after series of meetings decided to endorse Borno State APC position on the primaries and issued press statement to the effect that Borno State among other states, should elect their party candidates through the indirect primaries.

The spokesman added also that the decision of the 14 governorship Aspirants was binding on all the 24 governorship Aspirants whether in attendance or absent as far as democracy is concerned, pointing out that, the decision was also taken by the party State Executive Council, Local Government and Ward Executives of the party, meaning that, " that is what has been agreed upon, is a decision supported by the majority of the APC members across the 27 LGAs of the state."