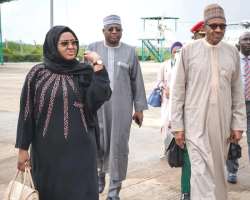 Clear indications emerged on Tuesday, September 25, 2018, that the Police Headquarters has invited the person that wrote a petition on behalf of the wife of the President, Mrs. Aisha Buhari over fraud allegation against the First Lady’s Aide De Camp.

An online media had reported that scandal was brewing within the household of President Muhammadu Buhari, alleging that Sani Baba-Inna, a chief superintendent of police, received huge donations from politicians and business people on her behalf and then kept the cash to himself.

But a source privy to the matter told Vanguard that the brain behind the petition has been invited by the Police at the Police Headquarters, Abuja, to give details of the allegation.

According to the source, “The person that wrote the petition on behalf of the First Lady is already at the Police Headquarters right now.”

It was reported that as a result of the information to Mrs Buhari, she requested the Inspector General of Police, Ibrahim Idris, to arrest and compel Mr. Baba-Inna to refund the money which was said to be N2.5 billion.

The online media had alleged that the police officer was arrested on Friday and kept in detention, with relatives having no access to him, family members say.

Although it has not been made public how the president’s wife came to know about the allegation, a source in her office allegedly claimed that one of the aides in the President wife’s office originated the claim.

An associate of the embattled police officer said Mr. Baba-Inna strongly denied the allegation, saying he received no donation from anyone on behalf of his boss.

It was gathered that immediately the police received the petition from Mrs Buhari, the ADC was arrested on Friday last week and investigation launched. One the sources reportedly stated that, “The IG said the matter must be investigated immediately and the house of the ADC was raided.

“Shockingly, investigators only found N1,200 cash in the House. His bank account was also investigated and had only a balance of N30,000 while the transaction records showed that most credits to the account were his salaries and allowances.”

The police, it was gathered, concluded that Mrs Buhari must have been wrongly informed as there was nothing to show or prove that such huge sums of money was in the custody of Mr Baba-Inna.

An associate of Mr. Baba-Inna said the police contacted those named as donors of the controversial funds but that they all denied making the donations attributed to them.

“For instance, one of those named was the IG of Police himself,” the source said. “But the IG said he has never passed any money through Baba-Inna.” When Mrs Buhari was informed of the outcome of police investigation, the source said the first lady flared up and accused the police of colluding “to protect one of their own”.

She then reportedly asked the State Security Service, SSS, to take over the case and get her money back.”

Following the information available to her, the wife of the president was said to have given orders that the matter should be investigated, hence, operatives from the Department of State Service, DSS took custody of Mr Baba Inna.