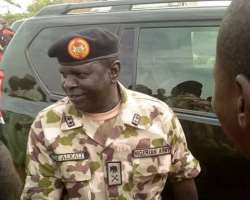 1. The attention of Headquarters Nigerian Army has been drawn to several attempts by certain disgruntled individuals but specifically one Dr Idris Ahmed of CUPS who resides in Coventry UK. He has been persistent on his Facebook page with posts insinuating that the NA is unconcerned about the missing Maj Gen IM Alkali and that the NA is complicit in his disappearance.

2. Consequently, the NA wishes to state as follows:

a. That Maj Gen IM Alkali (N/8353) retired from service after 35 years, one month and 3 days of meritorious service to his fatherland. His terminal leave commenced on 13 Jun 18

b. That Maj Gen IM Alkali is entitled to keep his NA driver and orderly which he still had at the time of his disappearance.

c. That as a retired senior military officer, Maj Gen IM Alkali has the freedom to travel anywhere without asking for permission from the NA. He is also at liberty to travel with or without his driver and/or his orderly.

d. That the wife of the senior officer, Mrs Salamatu Alkali drew the attention of the NA authorities to a suspected case of the missing senior officer on 5 Sep 18.

According to the wife, the retired senior NA officer left his home in Abuja for Bauchi on 3 Sep 18.

e. That the senior officer travelled without his driver and orderly but drove himself in a black Toyota Corolla.

g. That on receipt of the report from his wife, the NA attached an intelligence officer to the family to act as a liaison officer. The officer was also to obtain as much details from the family to aid investigation.

h. That Telephone Service Providers were immediately contacted to furnish the NA with the missing senior officer phone call records.

I. That appropriate technical intelligence, surveillance and cyberspace capabilities were deployed to track the senior officer’s phone and movement. His last known location was somewhere in Du District, near Jos, Plateau State.

j. That the COAS set up a task force led by the Commander Operation SAFE HAVEN comprising General Officer Commanding 3 Division in collaboration with the Fire Service, NEMA and other relevant agencies to intensify the search for the missing retired senior officer and make sure the mystery surrounding his disappearance is unraveled.

k. That in the course of the search for the missing senior retired military officer, sources informed that he may have been killed and his body and car dumped into a deep mining pit around Du District of Jos South Local Government Area.

l. That since receiving the report of the missing retired senior NA officer, the COAS has directed that no stone should be left unturned to locate and rescue the officer.

m. That despite several attempts to distract the NA from continuing the search either through the sponsorship of protest by women, preventing the delivery of logistics equipment by the locals as well as through biased and outright false reportage by so called ‘freedom fighters’ like Idris Ahmed, the NA has not relented in its resolve to make sure the retired senior officer is found and perpetrators brought to book.

n. That so far, the suspected mining pit is being drained to enable troops get to the bottom of the pond.

o. That the claims by Idris Ahmed that the NA is unconcerned and also sponsored the disappearance of the retired senior officer is to say the least imbecilic, childish and completely out of sync with reality.

p. That we dare Dr Idris Ahmed to provide evidence to support his infantile claims and advise him to stop playing politics with the life of an individual.

q. That Idris Ahmed should report back to his handlers and sponsors that he has failed in carrying out their directive to smear the image of the COAS, Lt Gen TY Buratai as well as the NA.

3. The public is hereby enjoined to disregard the publications and continue to give the military the needed support and cooperation. Together we shall bring total peace and security to our father land.