Pete Davidson gets death threats for being with Ariana Grande: 'Am I that ugly that people want to shoot me in the face?' 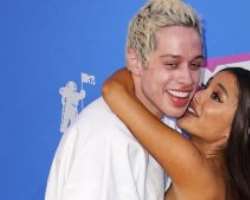 Pete Davidson  made his debut on  The Howard Stern Show  on Monday, and the 24-year-old comedian didn't hold back when dishing about  Ariana Grande . Davidson talked about their high-profile relationship with his usual self-deprecating humor and shed light on how they began dating.

The Saturday Night Live star credits Scooter Braun — who manages stars like Grande and Justin Bieber — with setting him and Grande, 25, up a few months ago. “Scooter Braun, booking my career and wife,” Davidson said. “I was down in the dumps, and he came and visited me at SNL.”

Both Davidson and Grande had recently gone through breakups. “Timing, I feel like, is everything. We both were in a similar situation at the same time,” he explained. Apparently, Braun helped arrange a  meet-up  for the pair, who had previously met when the “No Tears Left to Cry” singer was a musical guest on Saturday Night Live.

“Scooter told me she has somewhat [interest] in me,” he recalled, noting that Grande invited him to her New York apartment to hang out, something he thought was a pity invitation. Davidson ended up going over after her Met Gala appearance on May 7 — she still looked glam, while he was in sweats and a T-shirt. Apparently he was pretty insecure, but it seemed like she was having a good time. Eventually, he awkwardly made the first move.

“I literally was like, 'Hi, can I kiss you please?'” he said, recalling his concern over not being worthy of her attention. “Any time we're intimate I'm always apologizing and saying thank you. 'You're awesome for doing this, thank you so much.'”

Davidson, who was diagnosed with borderline personality disorder, got real with Stern when talking about dating with mental illness.

“Are you worried in a relationship with a woman that your extreme moods could destroy the relationship? That you're too much to handle?” Stern asked.

Stern said that even he feels like “s***” sometimes and that his wife is “too good” for him.

Grande is evidently sure, as the two got engaged weeks after dating.

The singer has made it clear that she's just as smitten, naming an interlude on her latest album, Sweetener, “Pete Davidson.” Davidson revealed that Grande came back from the studio one day and told him she had made a “little something” about him. “I just thought it was something low-key for us, and then I, like, cried … nobody even opened a door for me. Nobody gives a f*** about me, ever, and I was like, 'This is the nicest thing.'”

A downside to his new relationship is the scrutiny that comes with it. Davidson says he doesn't even have the password to his social media accounts and that he's gotten death threats over their romance.

When asked how he deals with the objectifications that his fiancée faces on a daily basis, Davidson had a rather TMI response.

“I get it. I was jerking off to her before I met her!” he said. “I've been there. I've been in the other shoes. Who knew I was practicing this whole time [for our relationship]?”

Davidson called being engaged to Grande “the weirdest, coolest thing that's ever happened.”