We have stepped down investigation into Adeosun's certificate forgery: ICPC 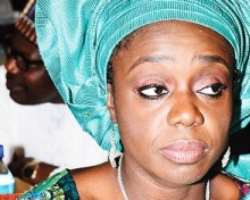 The Independent Corrupt Practices and other related offences Commission said on Monday that it had stopped investigations into the use of a forged exemption certificate of the National Youth Service Corps by a former Minister of Finance, Mrs Kemi Adeosun, The Punch has reported.

According to the newspaper,  ICPC stated this just as the NYSC said it had concluded its investigative report on the matter and submitted it to the Ministry of Youth and Sports Development, its supervising ministry.

The former minister, who resigned on Friday, admitted that the NYSC exemption certificate was not genuine.

The ICPC's spokesperson, Mrs Rasheedat Okoduwa, in a response to The PUNCH's enquiry on the matter on Saturday, promised to contact the ICPC authorities and get back on Monday for an official position.

Punch further reports that  Okoduwa had on Monday in a text message, said, “We stepped down the investigation into the matter so as not to duplicate the efforts of another agency which had taken it up.”

The ICPC did not specify the agency in follow-up enquiries.

Recall that the NYSC authorities in July said it “had begun its own investigations to unravel the source of the purported Exemption Certificate” obtained by the ex-finance minister.

The NYSC after over two months did not make the results of its investigations public.

The NYSC Director of Press and Public Relations, Mrs Adenike Adeyemi, on Monday, said the scheme had submitted its investigation to the Ministry of Youth and Sports Development for any further action.

“The report has been submitted to the Ministry of Youths and Sports Development and you can direct all your questions to them,” she said.

There had been reports in July 2018 that Mrs Kemi Adeosun did not participate in the one-year national youth service, but allegedly forged an Exemption Certificate several years after her graduation.

It had also been reported that the certificate, which is dated September 2009, was reportedly signed by an NYSC Director-General, Yusuf Bomoi, who already left the scheme in January 2009.

The minister had thereafter come under fire with several Nigerians, particularly on the social media, demanding investigations from the Federal Government into the allegations and calling for Adeosun's resignation.

The police have refused to comment on their failure to stop the former finance minister from leaving the country.

The Force spokesman, Jimoh Moshood, did not respond to calls and an SMS on the issue.

He had earlier claimed that the police could not investigate the alleged forgery by Adeosun because there was no formal complaint against her.

The Punch  also reports that the Peoples Democratic Party has told President Muhammodu Buhari to stop parading himself as 'Mr Integrity' following alleged revelations that the Federal Government smuggled  Adeosun out of the country.

It alleged that the action was to prevent her from “exposing how the Presidency cabal, including close relations and associates of Mr President fleeced the nation of trillions of naira.”

The PDP further stated that the All Progressives Congress in congratulating Adeosun, even after she had admitted her culpability on issues of forgery and corrupt practices, had further showcased itself as a party of corruption; an iniquitous fold, where thieves receive medals instead of condemnation.

The National Publicity Secretary of the PDP, Mr Kola Ologbondiyan, stated this in a statement in Abuja on Monday.

He said, “There are clear evidence that Adeosun could not have circumvented the Department of State Services, Nigeria Intelligence Agency, National Security Adviser's Office, the police and even the office of the Secretary to the Government of the Federation without the tacit approval of the Buhari Presidency.

“Furthermore, how did Adeosun evade checks by the Force Criminal Investigation Department in Abeokuta and the Ogun State House of Assembly for clearance as commissioner, with her status as a dual citizen, if not armed with inherent tendencies for fraud?

“It is clear that the Buhari Presidency exploited this factor to swindle the nation, in the finance ministry?

“The PDP urges the British Prime Minister, Theresa May, to note that Adesoun has already confessed to a fraud in Nigeria and must not be allowed a shelter in her nation.”