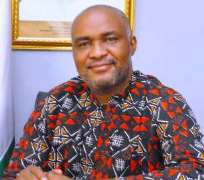 The typical Nigerian campaign circle revolves around the influence or formidable reach of the persons who parade around as the political king makers or what is generally termed as political godfathers.

Looking at it from another perspective, one can assert that the single issue that has come to define and dominate the typical electioneering or campaign periods in Nigeria right from post-independence period has up until 2018 has always been the conversations around the influences and powers of political godfathers to successfully hand pick their stooges who would be anointed to run for one political office or the other. Politics is obviously the biggest business in Nigeria because the wieldets of political powers at the centre determines who gets what because the redistribution of national wealth is skewed in favour of the less than two percent of the populace that constitute the power making elite. These persons hold courts in their magnificent private mansions erected from the resources of the entire federation whilst they were actively controlling the topmost echelons of political power. In retirement out of political offices these persons ate still regarded as king makers of political godfathers. Some have regional control of their spheres of influences whilst others are in charge all around the country. The self centred interest of these tiny political cabal have unfortunately become the center of attraction during political campaigns. These godfathers with national influences are usually visited by persons seeking the tickets of the two dominant political parties of PDP and APC. These godfathers sometimes combine their positions as traditional and religious leaders and essentially most of them have linkages to former powerful military Generals. The military called the shots in Nigeria's politics for nearly three decades.

In other words, what is conventional about campaigns in civilized societies like the United Kingdom, Germany, much of continental Europe and United States of America is not what worries aspirants to political offices in Nigeria.

In those Western civilized entities, those who seek for elective offices, have it at the back of their minds and indeed within their subconsciousness that the welfare and wellbeing of the people of their respective nations define the Kernels of their campaigns.

Even in the United States of America whereby there are popular voters and the electoral college which can be likened to an exclusive class of political elites or elitist constituents, the people and what will make them generally happy and to live meaningful lives is at the core of their campaign messages.

In our contemporary times, we can speak about certain influential families in the United States of America for instance that can be likened to members of political dynasties by virtue of their remarkable successes recorded in such families in terms of the caliber of office holders from such families but by and large there is an absence of political godfathers. There are such families like the Kennedy, the Bush; the Clintons. John McCain Who recently died from brain cancer was an institution politically.

For instance, if political dynasties or godfathers were to be instrumental to who picks the tickets of the two major parties of Republican and Democrats, then a rookie and total outsider like Donald Trump could not have succeeded in becoming the candidate of the Republican party who proceeded to win the election by trouncing/defeating the democratic party that presented Mrs. Hilary Clinton who can be considered as a member of one of America’s illustrious political dynasties. Hilary became both a Senator representing New York and the Secretary of state during the Barack Obama's Presidency. Obama was an unknown quantity when he emerged the first ever black American President which tells you that the voters are the real owners of the sovereignty of the USA.

In Nigeria, you need the backing and supports of political godfathers to stand a fighting chance of standing for elective positions of all categories even for such a lowly rated political position such as that of local councillorship.

Development economists as well as political analysts, have come to reckon that the over bearing influences of these godfathers are to be blamed for the sorry state of our politics. Political godfatherism has stiffled democracy at the local government level even as godfathers in the 36 states who are governors violate the constitution with impunity by hand picking their errand boys and mistresses as council officials even as the revenue from the federation account that should go directly to the local government ends up in what is called joint accounts which are stolen by most governors.

Nigeria’s politics suffer from the suffocating forces of lack of good governance, lack of transparent recruitment processes and the emergence in key positions of persons not sufficiently equipped and trained to control the different levers/platforms of political power configurations.

Rights from the pre-independence epoch to this contemporary time, the Nigerian political environment has been populated by crass opportunists and persons who at best can be described as belonging to the third eleven, that is if we are to assume that the political leadership map is like that of a football team.

The issues of corruption, collapsing infrastructures and poor governance records characterized by political instability, economic challenges and general state of insecurity that confront Nigeria as I write, can be traced to the overwhelming dominance of political godfathers who determine the fate of all political aspirants rights from the local councils up to the office of the president which is the highest in terms of control of the executive arm of government. These godfathers corner all the juicy contracts to fix the infrastructures and can as well deliver poor jobs or no jobs at all even as their stooges holding political offices lack the will power to demand accountability. The people are made to behave like mere spectators even whilst their commonwealth are shared by these opportunists and predators.

For instance, in 1999, Northern born military generals such as Ibrahim Babangida, Abdulsalami Alhaji Abubakar, and many others were instrumental to the anointing of the erstwhile military head of state in the 1970’s General Olusegun Obasanjo who was freed from an illegal imprisonment to become the presidential candidate of the Peoples Democratic Party (PDP) and for delivering him as the winner of the election that heralded the transition from military to civilian era.

The former military general, who served two terms between 1999 to 2007, then chose his successor in the person of the younger brother of the military General who was his military Chief of General Staff when he (Obasanjo) was military head of state in the mid 1970’s. Umaru Musa Yar’adua died before the end of his tenure making room for his vice Dr. Goodluck Jonathan to succeed him with the backing of the traditionally known political godfathers including the general Obasanjo who had initially picked him to become the vice president to the then governor of Katsina state Umaru Musa Yar’adua who was railroaded into office as president. Jonathan then proceeded to win a fresh term as president in 2011.

In 2015, the then erstwhile military head of state who has continuously been recycled within the corridors of powers from the 1970’s, General Muhammadu Buhari was sponsored by top shots and godfathers such as Senator Ahmed Tinubu, Chief Rotimi Chibuike Amaechi, Bukola Saraki and several other rebellious governors who moved from the ruling PDP to form a coalition called All Progressives Congress.

As preparation begins for next year’s poll, the influences of these political godfathers have even become much more forceful even as in many instances, these godfathers are currently waging political battles of supremacy with those surrogates and stooges they imposed as political office holders in all the mainstream and regional parties.

However, the incumbent president has behind him all those same political godfathers who had bankrolled his first campaign prior to his pyrrhic victory in 2015. The PDP parade too many of those political godfathers who hitherto conspired in 2015 to deliver victory to Buhari. These godfathers are battling for presidential ticket in PDP because their erstwhile party APC has shut them out and has conceded the ticket to the incumbent.

There is however too many dimensions of political battles between political godfathers and their hitherto political sons and stooges.

In Lagos, Akwa Ibom and Kano and to a large extent, in Sokoto, the political godfathers are baying for blood and for a perfect revenge of perceived lack of loyalty by these stooges they had supplanted in offices.

Mr. Godswill Akpabio who won election as senator to represent his side of Akwa Ibom had installed someone perceived or alleged to be his business front who was a top executive of Zenith Bank Mr. Udom Emmanuel as his successor in office as governor. For three years, rumours of discord between the godfather Mr. Akpabio and his god son Mr. Emmanuel became sensational.

The battle between the Akwa Ibom godfather and his godson led to what is now an open confrontation following the departure and defection of the godfather to the party that produced the president which also calls the shots regarding who would be arrested and prosecuted for alleged financial crimes by the Economic and Financial Crimes (EFCC).

Akpabio is alleged to be facing multiple charges of fraud amounting to over N100 billion USD but his hurried departure to All Progressives Congress is interpreted as his last ditch effort to avoid going to prison.

Akpabio’s defection has opened the political battle fronts between himself as his former trusted ally and the 2019 poll is expected to be topsy truvy.

Bola Ahmed Tinubu is not in good terms with his political god son governor Akinwunmi Ambode of lagos state.

Tinubu has reportedly asked his boy Mr. Ambode not to run for a second term and has anointed another of his boy Mr. Jide Sanwolu to replace Ambode. But the Lagos fights of the political godfathers are in two dimensions. Tinubu and Babatunde Fashola whom he brought into political fame are now rivals in such a way that Fashola has now become a godfather who has picked Femi Hamzat to run for office of governor to challenge Tinubu’s estranged boy Mr. Akinwunmi Ambode.

In Imo State, the battle is between Rochas Okorocha whose eight years’ stint in office has witnessed the worst kind of misrule, is propping up his son-in-law Mr. Uche Nwosu to succeed him.

Rochas however faces stiff fight both within the APC and the external camps made up of PDP and APGA, a party that has witnessed phenomenal resurgence in the South East of Nigeria.

Political godfathers behave true to their name.
‘Godfatherism’ is a term used in Nigeria to describe the strongman – dominated politics in the country (Albert 2005, Animasawun, 2013; Orji and Uzodi, 2012). Onu and Biereenu – Nnabugwu (2008, P.57) assert that ‘politics is seen as means of attaining wealth than as a process of service’ and that ‘godfatherism in Nigeria politics is behavior in which economically, politically, and socially well-placed individuals influence political, and economic processes (see Joseph, 1987).

The way to end the influences of godfatherism is for the electoral process to be reformed to make the role of money insignificant and to return sovereignty to the people of Nigeria in line with the constitutional provision.

These reforms of the electoral system must happen so that only those persons who are ready to serve the people selflessly are recruited by the electorate to occupy public offices. The fight to achieve these reforms will be bloody but it seems the people of Nigeria are not ready to wage the battles of our life time but are busy chasing after bread and butter and most electorate have started selling their votes to these same predatory political godfathers. A political revolution is needed and Nigerians need persons of exceptional charisma to mobilize them to take back our country.

I share these same sentiments. Nigerians please wake up and repossess your country.