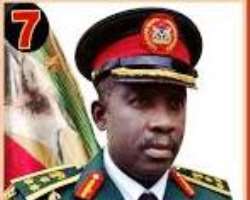 General Officer Commanding 7 Division of the Nigerian Army, Brigadier General Abdulmalik Bulama Biu has been described as one of the best hands the Nigerian Army parades in the battle field against Boko Haram insurgency.

Secondary school classmates of the new GOC at Government Secondary School, Biu made the assertion while honouring him as a worthy ambassador of their alma mata in Maiduguri on Saturday, with a call on citizens to assist the new GOC succeed in his assignment.

Spokesman of the group and former State Commissioner of Information Borno State, Mr. Inuwa Bwala stated this Saturday while presenting the plaque of honor to General Biu on behalf of his colleagues.

He also commended the Chief of Army Staff, Lt. General Tukur Yusuf Buratai for sending one of their own and best hand to Maiduguri in the continued fight against the Boko Haram terrorists.

According to him, the Brigadier General Bulama Biu's classmates who passed out of GSS Biu with him in 1984 can vouch for his capability and doggedness in the battle against Boko Haram and are convinced that Boko Haram will soon be a thing of the past with Bulama Biu in charge at the 7 Division.

While stressing the need for active citizen participation in the battle against Boko Haram insurgency by way of passing useful information to the command, Bulama's classmates expressed optimism that the Chief of Army Staff will see reason to appoint Bulama Biu to finish up the already won war against the Boko Haram insurgents.

The GOC while thanking his classmates for the honor done to him, went down memory lane, recalling the spirit of brotherhood that prevailed at their alma mata, describing the reunion with his classmates as a tonic that will galvanize him to do more for the country and the Army in particular.

He recalled how he cascaded the width and breath of Nigeria as part of his call to duty, and how his experiences have prepared him for the job he is doing and the attendant successes recorded so far since he assumed office.

He added he can see light at the end of the tunnel and he and his troops are planning to soon celebrate the total routing out of Boko Haram insurgents.

The GOC further assured that the Nigerian Army was more determined than ever before to end the menace of Boko Haram insurgents to secure Nigeria from any form of negative infiltration by terrorists.

He also paid glowing tributes to some of his classmates who died after they parted thirty four years ago, and encouraged the ones still alive to be their brothers keepers.

Bulama described the event as a family reunion which will leave indelible memories with him and his colleagues while dedicating the plaque to the sweet memories of their days in school.

The presentation which witnessed the attendance of many of his classmates also witnessed the formation of what is to be called GSS Biu Class of 84.