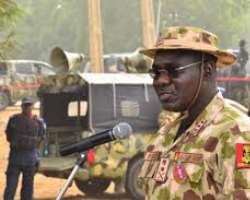 Troops of 192 Battalion of 26 Task Force Brigade of Operation LAFIYA DOLE in conjunction with Civilian Joint Task Force neutralized 14 Boko Haram terrorists in a village suspected to harbour terrorists that ambushed a civilian vehicle in Pulka area of Gwoza LGA of Borno state.

The troops engaged and subdued the terrorists following a superior fire power of troops in the village. Their aggressive posture, tactics and marksmanship resulted in the following;

The Acting General Officer Commanding 7 Division Brigadier General Abdulmalik Bulama Biu, through the Commander of 26 Task Force Brigade Brigadier General Dahiru, has commended the troops for their gallantry, urging them to maintain the momentum by taking out all Boko Haram Terrorists within the Division Area of Responsibility.