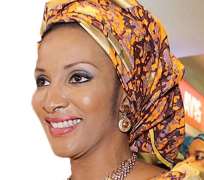 A leading pro-democracy and Non-Governmental body – HUMAN RIGHTS WRITERS ASSOCIATION OF NIGERIA (HURIWA) has upbraided the step children of Mrs. Bianca Ojukwu over their opposition to the senatorial ambition of their step mother and wife of their late father Late Chief Odumegwu Chukwuemeka Ojukwu on the ground of her state of origin.

The Rights group has equally asked the step children of Mrs. Bianca Ojukwu to settle their internal issues privately without dragging the immortal and legendary image of their great father to the mud on the political turfs for alleged pecuniary benefits. The group reminded the squabbling step Children creating media controversy over the political ambition of Mrs Bianca Ojukwu that their late father was not just their father alone but was the father of Igbo nation and a legend to millions of people around the World including human rights practitioners.

In a statement by the Rights organization authorized by the National Coordinator Comrade Emmanuel Onwubiko and the National Media Affairs Director Miss Zainab Yusuf, HURIWA said Mrs. Bianca Ojukwu by virtue of her legal status as wife of Ikemba Odumegwu Ojukwu is validly and constitutionally qualified to seek the mandate of Anambra South Senatorial Zone.

The Rights group has also tasked the step children opposing Mrs. Bianca Ojukwu’s political aspiration to represent Anambra South, to meticulously read chapter three of the Nigerian Constitution and chapter four of the same grund norm to see the futility of their political witch-hunt against a lady of distinction Mrs Bianca Ojukwu who was consistently loyal to her husband till death and event went on to represent Nigeria as our Ambassador in Spain.

Besides, HURIWA cited section 42 (2) which rubbishes the opposition to Bianca Ojukwu’s political aspiration because constitutionally, “No citizen of Nigeria shall be subjected to any disability or derivation merely by reason of the circumstances of his birth.”

HURIWA affirmed that constitutionally, Bianca Ojukwu qualifies to run for the office of senate to represent her people in Anambra South of Anambra State where she is married into because section 15 (2) of the supreme law states thus: “Accordingly, national integration shall be actively encouraged, whilst discrimination on the grounds of place of origin, sex, religion, status, ethnic linguistic, association or ties shall be prohibited.”

Aside the constitution, the Rights group reminded the step children of Mrs. Bianca Ojukwu that traditionally and legally a wife by virtue of valid marriage has become one and the same with the husband even as the group reminded them that professor (Mrs.) Ngozi Okonjo Iweala became minister twice on the status of being from Abia State, her husband’s state even when her state of birth is Delta.

HURIWA recalled that speaking with journalists in an interview, Dr. Ike Ojukwu, who is one of the directors of Ojukwu Transport Company Limited, believes that it will be a letdown to allow Bianca who is from Ngwo in Enugu State to represent Anambra South senatorial district where you have several prominent people in the Senate.

HURIWA recalled that Dr. Ojukwu queried: “Is she from Nnewi? She is from Ngwo in Enugu State. If you ask me, I would prefer someone who is a son of the soil, and because I come from Nnewi, I would like an Nnewi indigene to represent us.”

HURIWA however dismissed these sentiments as primitive, retrogressive; unconstitutional; despicable and shameful just as the Rights group challenged the step sons to also obtain nomination forms and contest for elective position rather than engage in the past time of operation pull her down politically which according to the group is a gross disrespect to the iconic personality of their late father and the husband of Mrs Bianca Ojukwu.