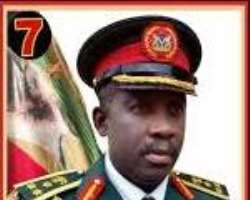 The Nigerian Army has assured the Independent National Electoral Commission (INEC) of its support and assistance that will enable the commission carry out its constitutional responsibility of conducting 2019 General Elections especially in North Eastern part of the country.

A statement issued by DDAPR 7 Division NA Maiduguri Colonel Kingsley Samuel yesterday saId the Acting GOC described INEC as a critical institution to democratic process in Nigeria and promised to provide security for all INEC staff and materials in all voting areas in hinterlands of the state, during the forth coming general election.

In his words, "the Nigerian Army will do all within its power to provide adequate security to INEC staff and their materials during the election".

.Earlier in his remark, the Resident Electoral Commissioner thanked the Nigerian Army for their efforts in combating Boko Haram insurgency, stressing that this has led to the return of peace in the State.

He prayed for God's protection and victory for the troops fighting insurgency in all parts of North East of Nigeria.

The INEC boss further commended the Nigerian Army for keeping electoral environment safe during previous elections, adding that such efforts gave INEC leeway in conducting their affairs without fear of intimidation and harassment from any quarters.

He used the opportunity to inform the Acting GOC of the Commission's end of registration for Permanent Voters Card (PVC) and also solicited for Nigerian Army's support during the distribution of the cards prior to election year.

Present during the visit were some Principal Staff Officers of the Division as well as INEC management staff.