Is Aisha Buhari an activist? 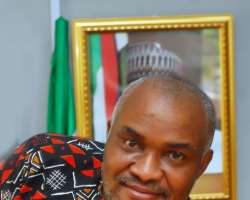 This piece is basically a reflection on the pet project of the wife of President Muhammadu Buhari who in her wisdom has chosen the thematic area of protection and promotion of women and children’s rights as her mandate.

But just before proceeding, it is noteworthy to also look at the illustrious effort the wife of a two times president of Nigeria Mrs. Oluremi Obasanjo made in her home to raise her children to become very strategic leaders in their chosen fields of human endeavours. In her own case, she seems to have faced tumultuous challenges in her home but still managed to play her motherly roles very appreciably well.

The reason for this seeming cross pollination of ideas on the issues around women and child rights is to demonstrate that indeed there are iconic women figures we can look upon to emulate their exemplary commitments towards the pragmatic advancement of these important sets of human rights. Human Rights being the natural entitlements that belong to members of the human race such as right to life; freedom of movement, association, freedom of religion, freedom from arbitrary arrests and denial of human dignity; freedom of religion; freedom of information/the press amongst others.

In that light we will begin by reading chapter 18 of a very profoundly philosophical book by Mrs. Oluremi Obasanjo titled: “Bitter-Sweet: My Life with Obasanjo”.

She wrote as follows: “I thank God that the children have done pretty well. Apart from her training in veterinary medicine at Ibadan, Iyabo also obtained a PhD in public health/epidemiology. Olubusola, my second daughter, has a Master’s in information technology and another master’s in economics. My older son, Segun, received a PhD in urban planning from Illinois Institute of Technology after studying architecture at Ahmadu Bello University, Zaria. Gbenga, too, has a PhD in public health. Enitan holds a PhD from Imperial College, London. She received her first degree at 19. The baby of the family, Damilola, is doing well in the U.S. as a chemical engineer.”

Recalling her rough edges in the marital union, she averted thus: “It was on account of Damilola that I received a most untoward treatment at the Ota farm. It was from this aide at Ota farm, Basiru, who was very insolent. A former operative of the State Security Services, who had been attached to Obasanjo when he retired from the military and as Head of State in 1979, he was retired from the SSS in 1995 when Obasanjo was jailed for treason. He was recalled when Obasanjo became President and was assigned to Ota Farm.”

“Damilola, had been having problems with the car her father bought her. She was spending so much that it was sapping her pay. So she requested for a change from her father who directed her to go to Ota for another car. On the appointed day, she was busy at work and could not keep the appointment. I offered to go on her behalf. I took the car with Busola’s driver on the wheels. When I got there I stated my mission. They brought another car and started to fiddle with the engine for a long time. When it became obvious that the replacement was no replacement, we agreed to come back a week later. When we duly returned as agreed, Basiru was enraged to see me. He ordered the gates shut and that I should not be allowed to leave with any car. It took entreaties before he finally allowed me to go”.

As a philosopher and a human rights activist, I will conclude by paying my respect to Mrs. Obasanjo for her encouraging motherly sacrifices to bring up her children in such a way that they are all successful leaders in their various professions.

Now to the wife of the current president of Nigeria Mrs. Aisha Buhari, we will look at her ongoing project to advance the cause of respect for the fundamental human rights of women and children. For the first in Nigeria's modern political history, the pet project of the wife of the President has received notable international acclaims from South Korea from where she bagged an honorary degree award and from China from where her pet project netted in a whooping N60 million fund in support of her ongoing project in defence of the human rights of women and children. It is hoped that the fund would be put to greater good of the women and children on the frontlines if violations of their human rights. May she learn from the wife of the late President Umaru Musa Yaradua who although reportedly set out o build a cancer treatment center and reportedly netted in billions of donations but she never etected this center until her husband passed on and till date nobody is asking question on what has bevome of her dream pet project which should have been put to public good. Aisha has just netted in funding support from China.

China has reportedly boosted with N60million the pet project of Wife of the President, Mrs. Aisha Muhammadu Buhari, meant to improve the lives of women and children across the country.

The Future Assured Project also caters for victims of insurgency in the North East and addresses youth education and empowerment.

Wife of the President, Mrs. Aisha Buhari, addressing State House Correspondents shortly after her arrival in Abuja on Tuesday (6/6/17) from United Kingdom where she went to visit her husband, who is on medical leave in the British capital. She conveyed the appreciation of President Muhammadu Buhari to Nigerians over their constant prayers and said he would soon return to the country.

Representing the wife of the President at the presentation event, Senior Special Assistant to the President, Dr. Hajo Sani expressed appreciation for the support and goodwill of the People’s Republic of China, saying the donation will reach its intended beneficiaries.

Dr. Sani highlighted the effort being made by Aisha Buhari to raise funds to support IDPs in Nigeria as well as refugees and other victims of insurgency across the West African sub region, especially among countries of the Lake Chad Basin.

She said the donation will also be used to cater for people beyond the borders of Nigeria.

Presenting the donation, the Deputy Chief of Mission at the Embassy of the People’s Republic of China, Mr. Lin Jin, said Future Assured has made tremendous impact in promoting the health and well-being of women, children and the vulnerable, and succeeded in making a difference in the lives of these people.

This, he said, is worthy of emulation.
“The Embassy pays great attention that its bilateral relationships should benefit people from all walks of life” said Mr. Jin.

Mr. Jin said Future Assured needs to be supported in order for its activities to reach more beneficiaries.

Highlight of the event was the presentation of the cheque to Dr. Hajo Sani.

Although media shy, but Mrs. Buhari has increasingly began to carve a significant nitche for herself as a silent revolutionary and human rights activist who if given the right support can do a whole lot of things to practically promote the women and children rights in a country such as Nigeria whereby women and children are relegated to the back ground.

Indeed, the reason for this reflection is to urge her to further expand the horizon and reach of her pet project to cover such noble ambitions of waging national campaigns for the mainstreaming and domestication of the child rights Act of 2003 across the length and breadth of Nigeria.

The bitter truth is that the twin evils of increasing menace of domestic violence and sexual violations of minors by depraved adults have constituted serious cogs to the wheel of progress in the area of ensuring the respect for the rights of women and children in Nigeria.

But the child rights Act was brought into being as a courageous effort to stamp out these vices.

The sad thing is that many states have yet to domesticate the child rights law which is meant to address the various ramifications of abuses of the fundamental human rights of children and our women. The UN has also waded in to demand its nationwide domestication.

Marking Nigerian Children’s Day last year whose theme was on the issue of child protection and the Sustainable Development Goals, UNICEF is calling for urgent action to adopt the Child Rights Act across all of Nigeria’s states and to heed the President’s call to end violence against children.

Millions of Nigerian children suffer some form of physical, emotional or sexual violence. According to a 2014 survey by the National Population Commission, with support from UNICEF and the US Centers for Disease Control and Prevention, six out of ten Nigerian children experience at least one of these forms of violence before they reach 18.

“Each one of us is responsible for creating a world where children feel safe, protected and empowered to speak up for themselves,” said Mohamed Fall, UNICEF Representative in Nigeria, using Nigerian Children’s Day as an opportunity to highlight the prevalence of violence against children in the country and measures needed to address it.

In line with the Sustainable Development Goal to end all forms of violence against children by 2030, Nigeria has launched a Campaign to End Violence Against Children by 2030, which reinforces the Presidential call to end such violence first made in September 2015. Since 2015, Lagos, Cross River, Benue and Plateau States have launched state-wide campaigns. The Federal Capital Territory and Kano states will mark Nigerian Children’s Day today by launching their own campaigns to end violence against children and Gombe State will launch its campaign on 7 June.

Recall that Nigeria adopted the national Child Rights Act in 2003 to domesticate the international Convention on the Rights of the Child. So far, State-wide Child Rights Acts have been passed in 24 of the Nigeria’s 36 states, with Enugu being the most recent to enact the law in December 2016.

“We call on the State Assemblies of the remaining 12 states to urgently pass Child Rights bills and on governors to sign those bills into law. We also call on governors of the 29 states who have not yet launched state-level campaigns to end violence against children to do so,” said Mohamed Fall. “And even while we increase our commitments to protect children’s rights,” he added, “We must work even harder to make these rights a reality for children in Nigeria.”

Human Rights Writers Association of Nigeria (HURIWA) hereby throws her advocacy support to the achievements of the salient human rights virtues which formed the centerpiece of Mrs. Buhari's pet project. We urge her to make her pet project accessible by credible civil society groups so as to serve as effective bridge beyween the end beneficiaries and those who toil day and night to ameliorate the untold human sufferings faced by our women and our children.