I stand with General Buratai and the Army 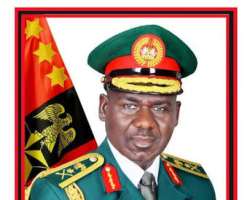 I have been an avid reader of the biographies of gallant and valiant military Generals all over the world. I will always remain fascinated by the lifestyle, leadership and patriotism of men like, An-Nasir Salah ad-Din Yusuf ibn Ayyub, known as Salah ad-Din or Saladin,Napoleon Bonaparte, Dwight D. Eisenhower, Douglas MacArthur and Collin Powell. Here in Nigeria, I have taken time to study and reflect on the military and this is where I want to say that we are fortunate to have a rare breed in the person of Lt. General Tukur Yusuf Buratai, the 20th Chief of Army Staff of the Nigerian Army which to mind is the most potent institution that has been able to keep this fragile nation of ours as one indivisible entity in peace.

I am writing this article from two different perspectives. First of all I am talking from the perspective of someone who was born and raised in the northeast, and secondly from the perspective of a media professional who has been able to interact with key stakeholders and the masses in the northeast. I make bold to say that there is a general consensus in the northeast that General Buratai is the best thing to happen to the northeast region apart from the emergence of President Muhammadu Buhari in 2019.There is also no gainsaying the fact that General Buratai is the most popular and most acceptable name when it comes to the fight against insurgency and alleviating the plight of the ordinary man in the northeast. I reckon that most people in the northeast region agree that he is honest, committed and passionate to see that peace and normalcy is entrenched in the northeast. By the way, the northeast is now stable except for some minute challenges in some remote areas of Borno state. There was a time when people in the northeast rightly or wrongly concluded that the military doesn’t want the insurgency to end because they reckoned it to be a cash cow. This is no longer the case. And if not for the fact that some bad eggs in Borno and other places are fuelling the insurgency for political gains, this Boko Haram insurgency would have totally been forgotten by now. I refuse to buy the cheap lie that says Boko Haram insurgency is simply an ideological thing; no. There are many people,sanctimonious hypocrites, men who are comfortable to fatten their financial chest with the blood of innocent peasants who are in the habit of encouraging, aiding,financing the insurgency and sabotaging the military.The joy of the matter is that there is virtually nothing under the sun that will ever go unnoticed, unrewarded and unpunished. The heavens are watching all of us.

As an individual, I am still skeptical and dissatisfied with the level of cooperation the Borno State Government is volunteering to the Army and in particular, General Buratai who is also a bonafide son of the soil. Despite all these setbacks and challenges I believe that General Buratai is focused on one thing: ending Boko Haram insurgency, armed banditry and all sorts of threats to our national security. There is no standing on the fence. Each and every one of us must take a stand with the Army Chief and support the Army. If we fail to do that, it means we are for the enemy. God forbid! He is not here to make selfish gains for monetary benefits. He is a dedicated Infantry General who on numerous occasions risked his life in the theatre of operations just to see that the insurgents are rooted out of Nigeria. He is fortunate to have a keen ability to identify good hands and formulate a strong team because as a military tactician he knows that he cannot do it alone. So like any good leader, he assembled a core team of trustworthy people who believed in his vision and relied on them heavily to get the job done.

"Even though he is a three-star general, he would still listen to what significantly lower-ranking people had to say,” says Special Forces officer in Borno to me. "His team had a very open way of communicating: they would read a mission, debate it internally, consider different viewpoints and then figure out the best way to approach it."

General Buratai is the kind of person who doesn’t talk much but is always ready to listen. He has been able to use maximum kinetic force to dislodge Boko Haram insurgents in the northeast and he is now shifting his focus to the non kinetic approach which will require all and sundry to join hands with the Army. In an interactive session with the media held on the 30th August 2018, General Buratai said, “In view of the aforementioned, I have directed that another sustained campaign focused on community stabilization be conducted to counter the negative narrative and ideology of the Boko Haram Terrorists. This is necessitated by the power which is inherent in a community when members of the community team up to achieve a desired objective. We have discovered the power that is embedded in large communities when they collectively team up to achieve a desired goal or objective. Community Stabilization as you are all aware is a measure of the sustained ability of a community to utilize available resources to respond to, withstand and recover from adverse situations. It is also a means where communities stand up as a collective entity to resist whatever is deemed alien to their beliefs, culture, tradition and way of life. The insurgents have used fear and extremely negative religious fundamentalism as a justification for the deployment of women and children as suicide bombers, setting ablaze Churches and Mosques while engaging in indiscriminate killings of innocent people.”

What impressed me most in his address was where he said: “Community Stabilization lies in the ability of every community to say, ‘No more will we allow this to happen to us again’, ‘No more will we support and protect those who seek to destroy us and our future’, ‘No more will we succumb to the cheap threats of these insurgents.’ The resistance by the community will create an internal system that will complement the efforts of the Nigerian Army and ensure that these insurgents are ideologically defeated completely. We have witnessed the increased determination of the people of the North East to resist and unite against the terrorists, following their relocation back to their ancestral homes. It is obvious that the people of the North East are developing a collective resilience which only needs to be encouraged and supported. This is a positive response against the initial imposition of a strange ideology by the terrorists. The Nigerian Army intends to build on this.”

This is high time for all of us to rise up and get involve in countering violent extremism measures and approaches in the northeast. I find ridiculous to hear people say they love President Buhari and yet refuse to give their maximum support to the Army. This is because the success of General Buratai and the Army will always be a major credit to President Buhari. My plea here is that I want to see renewed partnership and cooperation from the people of the northeast especially the National Security Advisor, The Chief of Staff to the President and the Borno state Government. In fact I see a possibility of a change of heart from people like Ahmed Salkida and their like. The European Union, United Nations OCHA and other INGOs cannot solve this menace; the people of the northeast must take the bull by the horn and say “No more will we support and protect those who seek to destroy us and our future”, “No more will we succumb to the cheap threats of these insurgents.”

Abubakar can be reached via [email protected]