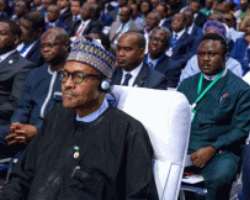 Four senators including former Akwa Ibom State Governor, Godswill Akpabio, who recently defected to the ruling All Progressives Congress will on Friday accompany President Muhammadu Buhari on a trip to China.

Nine ministers and four state governors all elected on the platform of the APC are also among top government officials that will be on the President's entourage.

According to a statement on Thursday by his Senior Special Assistant on Media and Publicity, Garba Shehu, the President would depart Abuja for China to participate in the 7th Summit of the Forum on China-Africa Cooperation scheduled to hold from September 3 to 4 in Beijing.

Shehu disclosed that Buhari's first engagement in Beijing would be an interactive session with the Nigerian Community in China at the Nigerian Embassy.

Before the formal opening of the FOCAC Summit, he said the President in his capacity as current Chair of ECOWAS, would deliver remarks at the High-Level Dialogue between Chinese and African leaders, business representatives and African entrepreneurs.

He added that the Nigerian President is scheduled to join President Jinping and other African leaders for the opening and roundtable sessions of the 2018 FOCAC Beijing Summit with the theme “Towards an even Stronger China-Africa Community with a Shared Future.”

The presidential spokesman said, “After the FOCAC Summit, President Buhari will hold bilateral meetings with President Xi Jinping and Prime Minister Li Keqiang to discuss infrastructure financing for strategic projects in Nigeria and the upgrading of Nigeria-China relations “from strategic partnership to comprehensive strategic partnership.”

“The President will also use the occasion of his audience with the Chinese leadership to assess the progress made so far in Chinese interventions in Nigeria's key priority infrastructure projects, particularly on-going projects in the railway and power sectors.

“It is noteworthy that since the last FOCAC VI Summit in Johannesburg, South Africa in December 2015 – the first attended by the Nigerian leader – and his successful State visit to China in April 2016, the current administration has pushed forward practical cooperation with China in the areas of infrastructure construction, trade, investments, finance, power, agriculture, education cooperation, among others.”