*Task FG on credible data base of missing persons:
By HURIWA 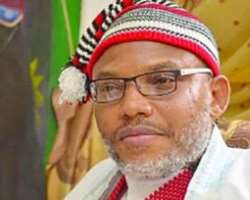 As the world marks the International Day for the missing persons, a pro-democracy group – HUMAN RIGHTS WRITERS ASSOCIATION OF NIGERIA (HURIWA) has condemned the conspiratorial silence of the Federal Government on the alleged enforced disappearance of the Director of the Europe registered but Nigeria proscribed Indigenous Peoples of Biafra (IPOB) Prince Nnamdi Kanu and his parents.

HURIWA said it is imperative that the Presidency which directed the Nigerian Army to in the words of the military 'flush out' the unarmed members of the indigenous people of Biafra (IPOB) is tasked under a legal obligation to render transparent and an unambiguous account of the whereabouts of Prince Nnamdi Kanu, his parents and dozens of other civilians who are victims of enforced disappearances as a result of the bombardments of the expansive premises of the leader of the now proscribed Indigenous peoples of Biafra (IPOB).

The Rights group charged the Federal Government to render proper accounts of the whereabouts of Mr. Nnamdi Kanu and his parents who were last seen after the ferocious attack in their country home in Umuahia by the Nigerian Army during the controversial Operation Python Dance Two. "The idea of keeping silence and hoping that Nigerians should forget that they watched on public and private media as the Nigerian Army attacked the premises of a Nigerian family in Abia state under the operation python dance two and half of the members of that family disappeared soon thereafter as a consewuence of that military invasion and attacks is unconstitutional and primitive. Let the federal government render account of what transpired that led to these enforced disappearances".

HURIWA has also tasked the Federal Government to provide clues that could lead to the finding of all missing members of the self-determination group IPOB who reportedly disappeared during the conduct of operation python dance II by the Nigerian Army characterized by widespread human rights violations including the use of physical and psychological torture on unarmed civilians only because they identified with the now proscribed pro-self-determination group known as Indigenous Peoples of Biafra (IPOB).

HURIWA called on the United Nations to protect the lives of members of the Nigeria proscribed Indigenous peoples of Biafra which is legally operational outsixe of Nigeria but hurriedly banned in Nigeria and these members and associates of this group are now seen as persona non grata whose lives are at risk of enforced disappearances or extralegal execution.

“We speak as a group of independent human rights practitioners and patriotic Nigerians working to institutionalize the supremacy of rule of law, constitutional democracy and respect for the constitutionally guaranteed fundamental human rights of all Nigerians and even non-citizens resident in Nigeria. We are by the opportunity offered by the symbolism of the 2018 international day for the missing persons set aside by the United Nations, appealing to the Nigerian government to account for the whereabouts of individuals who are victims of enforced disappearances particularly during the enforcement of all internal military operations. We also ask the Nigerian government to open up all detention facilities run by security forces for transparent audits of the detainees. Government must rescue the Christian teenage girl abducted by Boko Haram terrorists simply because of her faith and release all the over 100 Chibok girls kidnapped over three years by the dreaded armed terrorists of boko haram."

“We remind the Nigerian state of its obligations to protect and defend human rights enshrined in all major international human rights and humanitarian laws. We restate that in consideration of the obligation of States under the Charter of the United Nations to promote universal respect for, and observance of, human rights and fundamental freedoms, and having regard to the Universal Declaration of Human Rights, even as we recal the International Covenant on Economic, Social and Cultural Rights, the International Covenant on Civil and Political Rights and the other relevant international instruments in the fields of human rights, humanitarian law and international criminal law, we hereby remind Nigeria of Part One Article 1 of International Convention for the Protection of All Persons from Enforced Disappearance which states: “No one shall be subjected to enforced disappearance; No exceptional circumstances whatsoever, whether a state of war or a threat of war, internal political instability or any other public emergency, may be invoked as a justification for enforced disappearance” and “For the purposes of this Convention, "enforced disappearance" is considered to be the arrest, detention, abduction or any other form of deprivation of liberty by agents of the State or by persons or groups of persons acting with the authorization, support or acquiescence of the State, followed by a refusal to acknowledge the deprivation of liberty or by concealment of the fate or whereabouts of the disappeared person, which place such a person outside the protection of the law.”