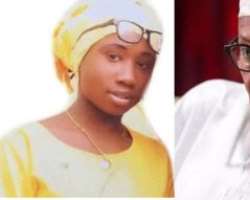 Leah Sharibu, the Christian schoolgirl abducted along with others from the Government Girls Secondary School, Dapchi in Yobe State by Boko Haram terrorists, has cried out to President Muhammadu Buhari to help get her out of captivity.

Her plea was contained in a 35 seconds audio uploaded by The Cable, an online newspaper on Monday.

She was heard saying, “I am Leah Sharibu, the girl that was abducted in GGSS Dapchi. I am calling on the government and people of goodwill to intervene to get me out of my current situation.

“I also plead to the members of the public to help my mother, my father, my younger brother and relatives. Kindly help me out of my predicament. I am begging you to treat me with compassion, I am calling on the government, particularly, the President to pity me and get me out of this serious situation. Thank you.”

However, the Presidency said the Department of State Services was probing an audio which was released and was purported to be the voice of Leah Sharibu, who is still in captivity.

The Senior Special Assistant to the President on Media and Publicity, Garba Shehu, disclosed this in a message he posted on his Twitter handle, @GarShehu.

Shehu said government’s official reaction would be released at the end of the investigation.

He said President Muhammadu Buhari was committed to the release of all those in captivity and would not rest until the feat was achieved.

The presidential spokesman wrote, “We are aware of the audio in circulation concerning the unfortunate situation of our daughter, Leah Sharibu.

“In dealing with terrorists, nothing is too trivial.

“The secret service is analysing the voice. Our reaction will follow the outcome of the investigation.

“For President Buhari, nothing will be spared in bringing all our girls home.

“He will not rest until all of them are freed.”