Pastor Reno Omokri To Former Igp Suleiman Abba : You Were Sacked Over Murder Of Kano Rec In 2015 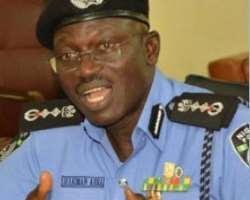 Former Special Assistant on New Media to erstwhile President Goodluck Jonathan, Pastor Reno Omokri, has slammed IGP Suleiman Abba (Rtd) for claiming that he was fired by the immediate past government for refusing

to rig the last Osun governorship election in favour of the Peoples Democratic Party, PDP.

Abba made this claim in an interview while addressing the circumstances surrounding his unceremonious exit from the police force.

However, Omokri said the ex-IGP’s poor memory exposed his own lies, stressing that he was sack by Jonathan seven months after the said Osun governorship election for dereliction of duty and his inability to account for the mysterious death of the then Kano state Resident Electoral Commissioner and his family.

A statement on Sunday by the ex-Presidential aide reads: “My attention has been drawn to recent comments by former Inspector General of Police, Suleiman Abba, who alleged that he was sacked by ex President Goodluck

Jonathan because he refused to rig elections in favour of the Peoples Democratic Party during the gubernatorial elections in Osun State.

“Speaking to Daily Trust on Sunday August 26, 2018, Mr. Abba had said ‘One of the leading stalwarts in the PDP then said to me: ‘IG (you know I was acting then) deliver Osun to us and we will confirm you quickly.’ I was shocked! That was when I knew that I may not last long in the office.’

“The former Inspector General of Police then blamed his failure to influence that election for his sack by then President Jonathan. “IGP Suleiman Abba is proof of the fact that liars need a very good memory otherwise they would contradict themselves with their lies.

“Let us examine some facts. The Osun State gubernatorial election held on Saturday August 9, 2014. The results of that election was declared the next day on Sunday, August 10, 2014.

“Mr Suleiman Abba claims to have been sacked because he failed to rig that election for the Peoples Democratic Party.

“However, Suleiman Abba was appointed acting Inspector General of Police on Friday August 1, 2014 and sacked from office on Monday April 20, 2015. “If it was true that Mr Abba was sacked for refusing to rig the Osun State

election, which held on August 9, 2014, why would former President Jonathan wait for 7 and a half months before sacking him?

“If it was true that Mr Abba was sacked for refusing to rig the Osun State election, which held on August 9, 2014, why would former President Jonathan keep him in office to preside over the Nigerian Police Force during the more important 2015 Presidential election which was even more crucial to the then President and the PDP?

“When juxtaposed with these facts, the accusation of the former IGP of Police makes no sense to reasonable men and women.

“Former President Jonathan is known as a man who is not desperate for power. He has a reputation for providing the enabling environment for free and fair elections.

“As a matter of fact, when the current chairman of the All Progressives Congress, Adams Oshiomhole, was re-elected after the June 2012 gubernatorial election in Edo State, the then Edo State Governor said on July 15, 2012 as follows:

“President Jonathan has demonstrated statesmanship. I think there is hope for Nigeria. What the Edo election has confirmed is that when the President and Commander-in-Chief puts the country first and conducts himself as a statesman, not just as a party leader, credible elections are possible.”

“This testimony, from an opposition governor, who was opposed to the re-election of then President Jonathan and who is now the chairman of the APC, completely rubbishes Mr Abba’s statements.

“For the avoidance of doubt, Mr Suleiman Abba was sacked for dereliction of duty, because under his watch, the Resident Electoral Commissioner of Kano State, Alhaji Mukaila Abdullahi, was burnt to death with his wife and two children on Friday, April 3, 2015, under suspicious circumstances after he had reported incidents of severe electoral fraud in his domain.

“When confronted with this suspicious death, the then acting IGP of Police gave contradictory and unsatisfactory answers. As a leader who valued the sanctity of human life, former President Jonathan ordered the sack of the then acting IGP and appointed Deputy Inspector General of police, Solomon Arase, to act in his stead and get to the bottom of the suspicious death.

“I therefore urge Mr Abba to find other ways to ingratiate himself to the current powers that be and leave former President Jonathan out of his lying schemes and plans.”