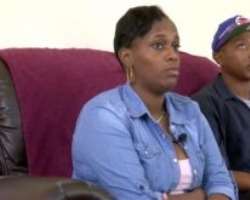 Teretha Wilson and McArthur Bryant raise their 10-year-old son Tamarion to call their elders “ma'am” and “sir,” but that politeness got the fifth grader in trouble from a teacher at his preparatory school.

The North Carolina parents told ABC-13 that they had Tamarion moved to a different classroom at North East Carolina Preparatory School in Tarboro after  his teacher punished him for calling her “ma'am.”

Tamarion had returned from school on Tuesday with a punishment he had to have signed by his parents. He went on to explain that he had continued to repeatedly call his teacher “ma'am” despite her requests not to, and was told to write the word “ma'am” written on a piece of paper four times per line on both sides as a penalty.

“He had a look on his face of disappointment, shame,” Bryant told ABC-13. “At the end of the day as a father, to feel kind of responsible for that…knowing that I have been raising him and doing the best that I can, it's not acceptable.”

Wilson went on to explain that Tamarion had recently been in the hospital for seizure-related activity, and had been suffering from memory loss and hallucinations.

Adding to their anger was how the teacher allegedly told Tamarion during the encounter that “if she had something, she would have thrown it at him” — which the parents said the teacher admitted when they met with her and the principal the next day.

“It wasn't right,” Wilson told to ABC-13. “It wasn't professional. As a teacher, it wasn't appropriate.”

Reps for North East Carolina Preparatory School did not immediately respond to PEOPLE's request for comment, but told ABC-13 in a statement, “This is a personnel matter which has been handled appropriately by the K-7 principal.”

Though Tamarion will moving to a different classroom, Bryant is warning other parents of this sort of behavior. “If it happened to my son, I'm pretty sure if not a week, a day, a month, a year, it will occur to somebody else's child,” he said.

And as for Tamarion's punishment, it was returned to the teacher, signed as promised — but with a second sheet of paper attached, the family said: Tamarion, writing the definition of the word “ma'am.”