What does Segun Oni really want? 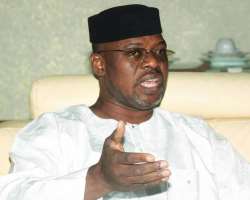 *“Ethics is knowing the difference between what you have a right to do and what is right to do.”* –Potter Stewart.

There is no gain saying that the legal ember stoked by Engineer Olusegun Oni against Dr. John Kayode Fayemi to deck the All Progressives Congress, APC, in Ekiti State in the toga of a divided house is uncalled for. Both Oni and Fayemi contested the primary election within the party along with other 31 eminently qualified aspirants and Fayemi emerged as the winner, while Oni came second, leading to the July 14 governorship election, which Fayemi also won.

Immediately after the primaries, Oni publicly congratulated Fayemi. As if that was not enough, the former promised to work for the latter as the candidate of the party ahead of the July 14 poll. He vowed not to leave APC because of his loss and promised to give Fayemi his support to win the governorship election. “I am a party person, I will not only support him (Fayemi), I will encourage him. I don’t have any intention of leaving the APC,” Oni said.

And they went to the July 14 election together with other generals in the party as a united force. Or so it seemed. Of course the APC won, and just while the party was beginning to savour the sweetness of victory, Oni struck with the blow of a discontented loser and came up with allegations against Fayemi, the persona of the APC victory, who he had earlier congratulated and claimed to have supported all the way.

Today, albeit the song is still that of victory within APC, Oni is no longer singing with fellow party faithful. He has changed his dance steps too, to that of war dance, not of victory. He has made good his threat to challenge Fayemi’s victory in court. He did not do it by proxy, he personally filed the suit through his lawyer, Gani Faniyi, accusing Fayemi of failing to resign at least 30 days to the primary election.

As if that was not enough, Oni also used the legal weapon prepared by the opposition against his party’s candidate, accusing him of having been indicted by a Judicial Panel of Enquiry, thus “not qualified to contest and participate in the said All Progressives Congress Governorship primary of 12th May, 2018 as an aspirant in that election.” The meat of it all is that Oni now covets Fayemi’s victory, and has asked the court to declare him the winner of the 14th July 2018 governorship election!

Perish the thought that Oni’s action was a mere puff. He means every jot of it. He claimed to have instituted the case against Fayemi “to protect the best interest of the members of the group and the greatest interest of the greatest number of Ekiti people,” adding that “the legal action will defend our rights, privileges and interests within the party.” Whatever that means can only be interpreted by Oni and his followers.

In the matter now pending before a federal high court in Abuja, Oni is the Plaintiff while Dr. Fayemi is the first defendant and APC the second defendant. This is the same party Oni was its Vice Chairman for the entire South before the election, making him the Number One APC member in Ekiti, and the whole of Southern Nigeria. Despite stepping down as the Vice Chairman of APC in the South of Nigeria, Oni was still compensated with the position of the Chairman of the Nigerian Export Processing Zone, and he held on to that before, during and after both the May 12 primary election and the July 14 general election.

Oni’s action has since drawn the ire of party leaders at the national level, and they had warneded him that it was tantamount to throwing stone from inside to inside and asked “those behind the court action to withdraw their case immediately if they are within our party and not agents of PDP”. They reminded Oni of the collective decision to support Fayemi resulting from a combination of persuasion, reconciliation, consensus-building and understanding on the part of all the stakeholders. But that story was for the marines, since Oni’s mind is already made up.

Oni says he wants justice, not for himself alone but for the interest of his group and the entire Ekiti people. But what kind of justice does he want that would require him playing the bull in a china’s shop? We all blab about justice. We all claim to know what it is, and we all apply it discretionarily. Whereas justice is a complex and an ambiguous concept. Be it moral, social, political or religious, justice defies definition, other than that it is what you do in your relationship with fellow being.

The classical philosophers first saw justice as “speaking the truth and repaying what one has borrowed.” But this could not withstand the challenge of times and the power of critical thinking. It was later improved upon to mean “to render to each his due.” This would still not suffice, despite an attempt to further explain it as “treating friends well and enemies badly.” The definition was again later modified to see justice as “to treat well a friend who is good and to harm an enemy who is bad” and later “justice is rendering to each what befits him.” Yet, all these definitions remained unclear.

Attempt had also been made to see justice through the aperture of religion, yet it keeps pushing its meaning back to the context within which it affects human relationships. The Bible views justice as loving our neighbor as we love ourselves, the Qur’an tells Muslims to conduct themselves well in their relationships with other people.

If rightly understood in the classical setting, justice is not to the exclusive advantage of anyone. Rather, it is concerned with the common good of the whole political community, and is to the advantage of everyone. It provides the society with a sense of unity, and thus, a basic condition for its health.

“Injustice,” says Plato, causes civil war, hatred, and fighting, while justice brings friendship and a sense of common purpose.” Plato is the most cited philosopher in Classical Greece and the founder of the Academy in Athens, the first institution of higher learning in the Western world.

For Engineer Segun Oni to be crying foul at this point is to be violating a strong equity maxim, which forbids anyone coming to equity doing so with unclean hands. As far as elections are concerned in Ekiti, whether primary or general, history is unkind to Oni. He is a renowned power hijacker, having never won any election fair and square. Oni came third in the primaries within the PDP fold in 2007, yet was imposed on those who came first and second and was eventually declared the winner at the general election. But after three and a half years of legal tussle, the appeal court sitting in Kwara State declared Oni as a usurper and declared Fayemi as the duly elected Governor of Ekiti State on 15 October 2010, thus put an end to Oni’s Pyrrhic victory and the beginning of the October 16 swearing-in for emerging governors in Ekiti.

Yet so far in Ekiti politics, Oni is the most favoured. He can be regarded in the Yoruba parlance as _*“O je n’igbo eegun, je n’igbo oro.”*_ Meaning one who has successfully oscillated between the two major political parties, PDP and APC, and getting the juiciest appointments for himself, at both the state and the national levels. Oni was a governor, Vice Chairman. South West of PDP, Deputy National Chairman South of APC and currently Chairman of the Nigerian Export Processing Zone. All these, he achieved without a clear victory at any election.

This certainly is not the kind of credential Oni would love to parade as a just fellow. Lest he fails to realise it, he has been carrying himself as someone not to be trusted with power in APC again, being a sworn ally of ex-President Olusegun Obasanjo. Not a few see Oni as guilty by association, believing that he definitely has one leg in APC and the other one outside of the party. It is in this light that anyone who argues that Oni is prosecuting his case against Fayemi with the best of intentions will be seen as an enemy of the party, APC, and the state, Ekiti.