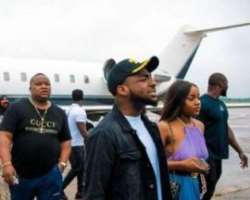 SOMETHING is certainly up the sleeves of Nigeria's ace singer, Davido, regarding his relationship with Chioma, his heartthrob that has continued to strengthen his Assurance.

Not only that the cameras have continued to trail the singer and his celebrity chef queen, to record and expose details of their immense expression of love and doting on each other, Davido, has increasingly, given hints that the affair, may well be the first that he would have to cement at the altar.

That was the meaning his recent outing when he landed in Owerri in his newly acquired N10billion private jet with a hint to traditional marriage. – Whirlwind News