You Are A sore loser: Tambuwal hits back at Tinubu 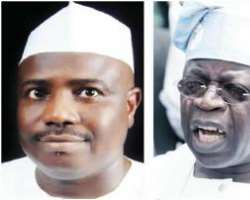 The Governor of Sokoto State, Aminu Tambuwal, has responded to critical comments made by former governor of Lagos state, Bola Ahmed Tinubu, that he left the ruling APC party because he lacks what it takes to defeat President Muhammadu Buhari in any political platform.

“If I wanted to and if the Presidency is what (why) Ahmed Tinubu thinks I defected, I could contest with President Buhari under the APC. I have what it takes to have contested with Mr. President, Tambuwal said.

“Tinubu tried to rock the boat when he was denied Buhari’s vice presidency. He thinks every other person could behave his way. If I wanted to contest under the APC as president, I could have done so and only the votes could have produced a winner.”