By Department of State Services (DSS) 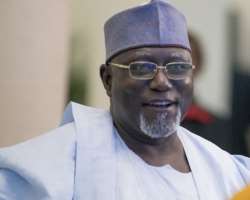 The attention of the Department of State Services (DSS) has been drawn to the circulation of fake information and videos in which several items were said to have been recovered from the Katsina and Abuja homes of its immediate past Director General, Lawal Daura. These non-existent items include:

2. In another video also in circulation, some persons believed to be personnel of a security outfit were seen forcing open safes stocked with money. The security operatives were described as executing a recovery operation at the Katsina home of the former DGSS.

3. Consequently, the Service wishes to inform the public that these videos are false and should be disregarded. So far, no such recovery operations have been undertaken by the EFCC or any other security agency at DSS’ office or residences of the former DG.

4. There is no doubt that different interests have continued to give varied accounts of the incident of last week at the National Assembly. It may, however, be recalled that the Presidency had pledged to carry out a detailed investigation regarding the alleged National Assembly siege. The public is, therefore, advised to exercise restraint in their narration of events and as such, desist from spreading fake news or engaging in activities that may mislead or further cause a breach of the peace as well as preempt the outcome of investigations.