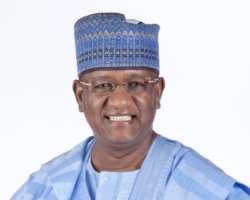 Borno Governor, Kashim Shettima on Sunday took to his social media platforms to celebrate the 71st birthday of an elder Statesman. Below is what Governor Shettima posted on his Facebook page and twitter.

"I, on behalf of Government and the good people of Borno State, celebrate INDIMI not because he has been a productive billionaire but because his wealth has been of benefit to Borno citizens.

"Currently, Alhaji Indimi is steadily committed to delivering hundreds of model houses equipped with modern schools and other essentials of life located in Bama and Ngala local government areas as part of his contributions to combined efforts of stakeholders in ongoing rebuilding of Borno State.

"Back in 2014, Alhaji Indimi had donated nearly one billion naira at a Presidential fund raising dinner in Abuja for support of victims of Boko Haram terror in northeast.

" It was that support from INDIMI, other good Nigerians, the Federal and government of 36 States (including Borno) that led to formation of the Victims Support Fund (VSF).

"The VSF has been involved in making interventions on emergencies, humanitarian needs and ongoing rebuilding efforts across the northeast.

"These instances of critical interventions by Alhaji INDIMI are apart of several others he is known to offer to numerous individuals and to religious courses which are very dear to the hearts of many citizens in Borno State.

"May Allah continue to bestow His grace on Alhaji Muhammad Indimi and all our elders in Borno State! Aamin!", Shettima added