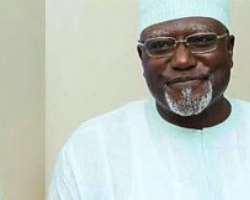 The arrest and interrogation of former DG of the DSS, , Lawal Daura, has netted a big fish in his immediate predecessor, Mr. Ita Ekpenyong, over an  alleged N17billion fraud in the agency.

Daura who arrested on Tuesday under dramatic circumstance after he was fired by Acting President Yemi Osinbajo had been under intense interrogation following his house arrest.

Officials of the EFCC had been probing the ledger of DSS under Ekpenyong in which some discrepancies about expenditure of certain funds meant for personal, operational and capital projects.

Inside EFCC sources said the investigation commenced in 2016 months after Ekpenyong who was an appointee of ex-President Goodluck Jonathan was relieved of his position by President Muhammadu Buhari.

Whereas EFCC was said to have made a headway into the inquest, there were allegations of cover up by Daura when he assumed full control of the DSS.  This, according to sources, precipitated the arrest of Ekpenyong by operatives of the Economic and Financial Crimes Commission (EFCC) on Thursday.