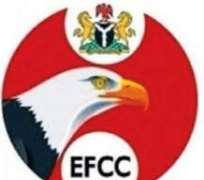 The foremost civil society organization: HUMAN RIGHTS WRITERS ASSOCIATION OF NIGERIA (HURIWA) has condemned the incessant political manipulation of the Economic and Financial Crime Commission by the presidency, noting that the Anti-graft commission is rapidly loosing public confidence and is acquiring a notorious reputation as the attack dog of All Progressive Congress (APC).

HURIWA specifically condemned the unconstitutional freezing of the bank account of Benue and Akwa Ibom States that are controlled by the Peoples Democratic Party (PDP), just as the rights group described the unending meetings between the Acting Chairman of the Economic and Financial Crime Commission (EFCC), Alhaji Ibrahim Magu and the Acting President Professor Yemi Osinbanjo as nocturnal politically motivated hatchet meeting aimed at marshalling out strategies for witchhunting political opponents of the Presidency.

In a media statement authorized jointly by the National Coordinator Comrade Emmanuel Onwubiko and the National Media Affairs Director, Miss Zainab Yusuf, HURIWA expressed displeasure that inspite of the notoriety attracted by Economic and Financial Crimes Commission in the global human rights report issued by the United State of America which affirmed that the Economic and Financial Crime Commission (EFCC) is been used for political witch hunt by the federal government, the Presidency has persisted in the pastime of implementing steps for a direct political manipulation and control for pokitical agenda of the Anti-graft Agency (EFCC).

The rights group recalled that the global human rights report for the year 2017 from the State department of the United States of America had indicted the Economic and Financial Crime Commission (EFCC) over her apparent lack of professionalism and political neutrality in the administration and enforcement of the EFCC ACT of 2004, even as the report had stated as follows. “EFCC arrest and indictment of politicians continued through the year, implicating a significant number of opposition political figures and leading to allegations of partisan motivation on the part of the EFCC.”

HURIWA expressed shock and consternation that inspite of the fact that the Economic and Financial Crime Commission (ESTABLISHMENT) ACT 2004 enacted by the National Assembly of the federal republic of Nigeria as a legal framework to govern the operations of the anti-graft agency confers some commendable level of operational autonomy and did not envisage that the head of the commission should be turned into a presidential errand boy, on the contrary, the present Administration has converted the acting chairman of the EFCC into a chief servant of the presidency who frequents the offices of the president, the vice president or the acting president (as the case may be) to take instructions on which of the Peoples Democratic Party’s controlled states should be attacked including the illegal freezing of operational accounts of these opposition states. The group stated that these incessant pokitical interferences in the affairs of the EFCC by the Executive arm of government has led to a general perception around the World that the war against corruption and economic crimes been waged by the Presidency is targeted at harassing, intimidating and oppressing the leading political opponents to make it easier for the incumbent administration to enjoy easy ride during the forthcoming general election next year in which the incumbent President has declared intention to run. HURIWA also affirmed that the controversy generated by the open display of partisanship by the acting Chairman of the EFCC who wore the campaign badge of President Muhammadu Buhari to the inauguration of the newly built multibillion Naira worth headquarters had hardly died down before it has again become a notorious fact that the head of EFCC takes regular directives from the Presidency as if the hierarchy of EFCC lacks the necessary competences to administer the EFCC without being teleguided by the politicians in the Presidential Villa who have partisan objective to win the next general election.

HURIWA stated that the enabling law setting up the anti-graft agency makes comprehensive provisions for the head of that agency to operate as the chief executive officer and chief accounting officer and wondered why the current government is breaching the law and creating the impression that the EFCC operates at its beck and call.

“We have perused the entire corpus of the EFCC Act and particularly the part II from section 6 down to section 7, and we are unable to sight which provision makes it imperative for the head of the agency to always take direct instructions from the presidency on who to go after whilst carrying out their functions in line with the principle of the rule of law. The only sub-provision that speaks to the issue of an interface with the executive is that which requires that the EFCC maintains a liaison with the office of the Attorney General of the federation amongst other Para-military and security agencies. There is no provision that states that the Head of the EFCC should often be found with the President or his vice to hold consultations and if any of such interpretation is held by the presidency for always interfering in the affairs of the EFCC, then this must stop forthwith.”

“May we by this statement urge the presidency to stop influencing the operations of the anti-graft body and allow them to effectively go after corrupt public officials.The Current politically motivated attacks directed at the leading opposition political party and the states controlled by the PDP will if not stopped, completely rubbish the integrity of the mechanisms for anti-graft battle”.