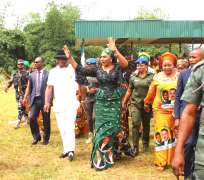 The Wife of the Governor and founder of Caring Family Enhancement Initiative (CAFÉ), Chief, Mrs. Ebelechukwu Obiano (Osodieme) has reassured of her commitment for the wellbeing of indigent women, widows and youths in Anambra State. Speaking at the respective Council headquarters, Osodieme said that the annual tour which she undertakes in collaboration with the State Ministry of Social Welfare, Children and Women Affairs is an important outreach programme targeted at women in various communities across Anambra State.

Osodieme explained, in the course of this tour, “we will be supporting government initiatives aimed at improving the fortunes of our indigent sisters and brothers with various gift items. But I want you to understand that it is not just about handouts but a means of telling them that they are not forgotten while also bringing information that can help them be better citizens.” She stressed the need for the indigent and persons with physical challenges not to resign to fate, but rather key into the CAFÉ Skills training and empowerment programmes which has successfully changed the lives of over four thousand for good by equipping them to become owners of various small scale ventures in the area of tailoring and fashion design, computer and telephone repairs, bakery and confectioneries, interior decoration etc. She announced that the last batch of 350 persons trained on the various skills will soon be empowered. Harping on the importance of immunization, Osodieme appealed to pregnant and nursing mothers, especially those residing in the rural areas, to make adequate use of the free medical provisions of the various Primary Health Centres in their communities for regular free immunization against childhood diseases. She pleaded with them to report without delay to the President Generals or Council Chairmen, any case of lack of vaccines and other medical demands or attempt to extort them by any personnel.

In her remarks at Orumba South Member Representing Orumba South at the State House of Assembly, Princess Nikky Ugochukwu said that Anambra State is blessed with a caring First Lady who lives a life of charity which she translates in her relationship with others. The Hon Member called on the people to support the efforts of the wife of the governor. On her part, Commissioner for Social Welfare, Women and Children Affairs, Lady Ndidi Mezue, noted that among the charitable programmes undertaken by Osodieme, which building homes for widows, the care for the mentally challenged and their caregivers at Nteje stands out a clear act of selfless giving which should be commended by everyone. According the Commissioner, the concern by Osodieme is evident in her insistence “that salaries of the care-givers should not come later than the 24th of every month when the government pay the workers in Anambra State.”

In their brief remarks, the Commissioner for Health, Dr. Joe Akabuike, said that the emergence of Anambra State as the best state on immunization was a collective commitment but largely due to the special interest Osodieme have on the programme which she advocates everywhere women are gathered. In the same vein, Commissioner for Environment, Architect Mike Okonkwo said commended Osodieme for the special attention she gives to the welfare of ndi Anambra in support of the government through the initiatives of CAFÉ and willingness to collaborate with relevant government agencies whenever the need arises. Cross-section of women and beneficiaries at Orumba North and South Local Government during the 2018 Community Tour recently.

Welcoming Osodieme, the Chairman of Orumba South Local Government Area, Barrister Ray Onyegu, and his counterpart from Orumba North, Architect Emeka Aforka, thanked her for coming; and highlighted the humanitarian projects of CAFÉ which has permeated most communities as a major feature of support to the present government and urged Osodieme not to relent.

Various items including bags of rice, school bags, mosquito nets, exercise books were handed out to the less-privileged and the physically challenged from the thirty one towns of the two council areas.

The tour will take Osodieme and her entourage to the twenty-one Local government areas of Anambra State. Cross-section of women and beneficiaries at Orumba North and South Local Government during the 2018 Community Tour recently.