Matthew B. Seiyefa Appointed as Acting DG of DSS 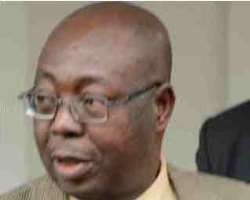 Matthew B. Seiyefa
Listen to article

The Presidency has confirmed the appointment of Mr. Matthew B. Seiyefa as the Acting Director of the Department of State Services.

The announcement was tweeted on Tuesday via the verified Twitter handle of Presidency Nigeria‏ @NGRPresident.

Presidency Nigeria ✔@NGRPresident
UPDATE: Matthew B. Seiyefa, the most senior Director in the Department of State Services (DSS), will act as Director-General until further notice.

Presidency Nigeria ✔@NGRPresident
Acting President @ProfOsinbajo has directed the termination, with immediate effect, of the appointment of the Director General of the Department of State Services (DSS), Mr. Lawal Musa Daura.

Twitter Ads info and privacy
Acting President, Yemi Osinbajo, had earlier met behind closed doors with Seiyefa who, until his appointment, was the most senior director in the DSS.

The meeting was held inside Osinbajo’s office at the Presidential Villa, Abuja.

The appointment became necessary as the erstwhile DG, Lawal Daura, was sacked in the wake of the invasion of the National Assembly by security operatives on Tuesday morning, under Daura’s directive.

The Presidency denied sending Daura on the assignment, and went ahead to sack the erstwhile DSS helmsman.

Osinbajo had, while terminating Daura’s appointment, asked him to hand over to the most senior official in the agency.

Seiyefa, from Bayelsa State, arrived the Presidential Villa in an official Sports Utility Vehicle at about 4pm.

He was seen clutching an office file as he made his way into Osinbajo’s office. Shortly after his arrival, the Acting Chairman of the Economic and Financial Crimes Commission, Ibrahim Magu, also arrived.

Magu, however, left before Seiyefa at 4.40pm without talking to State House Correspondents.